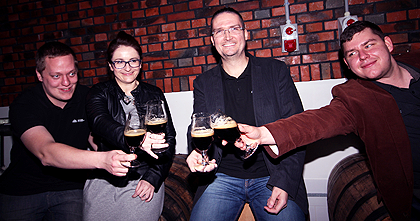 One of the most powerful beer styles, WRCLW Rye RIS, is back on taps. Quite a treat for craft beer enthusiasts looking for a stronger, full-bodied beer. The “Imperial” adjective stands for the best and strongest beer from our offer. More about the beer itself at: https://100mostow.pl/en/rye-ris/

The Best Imperial Stout in Poland!

WRCLW Rye RIS Barrel Aged; winner of the gold medal at the Craft Beer Competition and the title of the Best Imperial Stout in Poland. This year WRCLW Rye RIS Barrel Aged has been stored in Jack Daniel’s bourbon barrels. Original American whiskey, authenticity, self- confidence, promising smile and proud. It’s a treat for “men among men”. This will certainly be one of the more significant events of the coming year. The great debut is scheduled for March 2017.

It’s been a successful year both for our team and the city itself. As the city of good beer, Wrocław is booming. We have triumphed at the biggest and most prestigious Craft Beer Competition in Poland.

And here are more awards and opinion-forming reviews:

We appreciate all awards. The higher consumers’ expectations, the more craft is going to develop. The more people expect, the more they are aware of, the more they talk and share, the better for craft. We’re 100% committed. Browar Stu Mostów was awarded the Gault&Millau toque for excellent foodpairing and designing flavours to match specific beers.

The end of year seems to be the best moment to say a few words about Concept, our newborn baby. Concept Stu Mostów shows our engagement in building taste awareness and developing beer culture. Concept Stu Mostów, a craft workshop located 30 meters away from the brewery where a baker, cheese maker and chef cooperate to produce beer pretzels, sour dough breads, mustards and vinegars. Browar Stu Mostów enhances their unique offer as beer, wort, malts and brewers grains are used in the production of pretzels, breads and mustards.

Concept is a place friendly for producers and farmers. It is where you can taste not only beer, but also sour dough bread, natural cheeses and cold meats. All products are produced locally and 100% handmade based on original recipes. We’re also offering preserves. This project has become a source of inspiration for many. It will certainly shake up many mustard shelves in Wrocław. We’re also hoping to revive the tradition of having traditional pretzels with beer. More about the project at: https://100mostow.pl/concept-stu-mostow/

It’s once in 250 years that an essential part of the city’s history and identity is recreated. Our great effort has brought about great promotion for Poland, Wrocław and Browar Stu Mostów. The debut may be considered as the event of the year. The 120 guests who visited us to celebrate the premiere included beer enthusiasts, brewers and brewing technologists from all over the world. They represented 20 countries from 6 continents: Czech Republic, Germany, Austria, France, the Netherlands, Belgium, Denmark, Great Britain, Ireland, Bulgaria, Romania, Macedonia, Croatia, Slovenia, Italy, Switzerland and Portugal. There were guests from the USA, Uruguay, Venezuela, Australia, South Africa and Japan. What unbelievable turnout. It felt like the magic of the legend that Poland has never experienced. On becoming so successful, Schops has entered our permanent offer. Along with a group of restaurateurs from Wrocław, we’re promoting the beer style as an essential part of the city’s history.

More about the beer itself at https://100mostow.pl/schops

More about the project at https://100mostow.pl/projekt-schops

Read an interview about brewing traditions at https://www.youtube.com/watch?v=bLxPeHNm1Oc

ART stands for beers created in collaboration with other breweries. Targeted at creative and open-minded people, this brand builds bridges between communities and beer styles. It symbolizes what craft is. We want to show craft as part of the creative capital of WRCLW, Lower Silesia and Poland.

This year we have completed as many as 5 successful collaboration projects.

ART#5 Imperial Apricot IPA, January 2016. As the first brewery in Poland, we brewed in cooperation with an American brewery Pizza Boy Brewing from Pennsylvania, winners of the silver medal at 2014 World Beer Cup 2014 in the experimental beer category. We’ve decided on a legendary style and added apricots.

ART#6 Dinkelbier with carrots, March 2016. We’re joining forces to spread knowledge about taste and flavours. This time we have cooperated with Food Think Tank, a foundation that associates experts from many fields who look at food from multiple perspectives. FTT follow their own culinary trend which is a source of inspiration for fresh ideas. Read more about the project at our blog https://100mostow.pl/en/2016/03/19/art6-ftt-2/

ART#7 Red German IPL. India Pale Lager, or a stronger version of full-bodied Brewed with our friends from Camba Bavaria, it is hopped in the German version. Camba Bavaria is one of the most prestigious German breweries. Here is the news coverage: https://youtu.be/seWpNGiMoYU

ART#8 Strawberry Berliner Weisse brewed in collaboration with the Berlin-based brewery. Berliner Weisse is a cloudy, sourish wheat beer with low alcohol contents. Thanks to craft brewing this style has been revived. The bridge WRCLW – BRLN stands strong. ART#8 made its debut at the Good Beer Festival in Wrocław, where it was highly appreciated.

ART#10 Coffee Milk Amber Ale, October 2016. The second beer brewed with coffee in the history of Browar Stu Mostów. This time Amber Ale with lactose, roasted cocoa beans and Colombia Rio Negro coffee. What an unusual sensory profile: grapefruit, green grapes, sourish candy plus a creamy mouthfeel. The release of the beer has coincided with Filip Kucharczyk from the Czarny Deszcz coffee roastery winning the Coffee World Cup in the Aeropress category.

ART#9 Oatmeal Hoptart. Another milestone; a collaborative brewing with the American Bristol Brewing Company. Berliner Weisse works as the foundation whereas oatmeal flakes and abundance of American and Australian hops added in the late and dry hopping methods give the beer its exceptional oatmeal, sourish and slightly bitter profile.

ART#9  has won the bronze medal in the Speciality Beer category: Other Sour Ale at the 2016 Brussels Beer Challenge. The beer also won the title of the Debut of the Month according to PolskieMinibrowary, placed at the top of the Berliner Weisse ranking by Piktor at Il Piwo, and earned the name of Craft of the Month at the Polski Kraft application. It’s been named one of top 4 Berliner Weisse of all times according to www.RateBeer.com

Such projects only go to show the difference between craft and commercial brewing. The ART series stands for creative cooperation and openness for new experience. Building bridges between communities and beer styles, the brand has attracted numerous talented and passionate people. https://youtu.be/h4YB8nUsoQg%C2%A0

Collaborative brewing represents the typical features of the craft community: openness, knowledge exchange and inquisitiveness. This type of cooperation while designing first the idea, and then the recipe for beer is what craft is known for.

In 2016 we completed two collaboration projects outside WRCLW. The first historic one took place in Bavaria, the other one in the Netherlands.

We’ve been invited by Camba Bavaria to the world’s biggest hop growing region to brew outside WRCLW for the first time. Our visit has sparked off a debate about the freedom of brewing that Polish breweries enjoy. Contrary to Poland where there are no limits as to beer brewing, Bavaria faces the challenges of the 500-year-old Beer Purity Law, which bans using other spices than hops. It was introduced to ensure the quality of German beer. The meeting has inspired us to explore the topic of our competencies and developing hop fields in Poland. This is the reason why Hallertauer IPL – brewed in cooperation with Camba Bavaria made its debut at the Lublin Craft Beer Expo. More information at: https://100mostow.pl/en/blog/2016/11/21/hallertauer-ipl-collab/

We’ve brewed with Jopen Kerk in Haarlem near Amsterdam. Jopen is the world-class brewery and the most often bought Dutch craft beer worldwide. Established in 1992, Jopen has been one of the founders of the European craft revolution. When it comes to the idea of craft, we are definitely on the same wavelengths as the brewery’s founders, Michel Ordeman and Lydia Zoetman. We met to start our collaboration project at their beautiful brewery JopenKerk. The modern brewery is equipped with state-of-the-art technological solutions. Being located in a historic building, Jopen combines traditional and new-wave approaches to create opportunities for craft beer. The brewery is of an urban character. Their aim is to recreate brewing traditions in Haarlem. Since the very beginning, they have focused on recreating native and regional styles. The aim of the meeting was to share experiences and familiarize the Dutch with Polish traditions. Our hosts noted the presence of our beers on their market. Our beers are available in Haarlem and well appreciated in the Netherlands. We’ve been on offer in Bavaria, Berlin, and the USA. Our collaborative brewing with American breweries has done a lot to spread the word. Our aim was to brew a beer that would bring to mind Poland and that we could distribute on a wide range of markets. For now, the joint project will ensure the distribution of our beer to many European countries and in the USA. We’ve agreed on the style: traditional, historic, and very classic. We’ve designed the recipe. We brewed 6 beers in 3 days. The project will make foundations for the great promotion of Polish craft set for January 2017. To learn more visit https://100mostow.pl/en/blog/2016/10/29/wrclw-hrlm/

Wrocław has been flourishing as the Capital of Good Beer. Our customer base has been expanding over: pubs, multitaps, restaurants and hotels. Everyone is doing a great job to develop our industry and offer. Brewing in Wrocław with its Beer Geek Madness and Good Beer Festival feels like magic.

What an incredible team we’ve got! We draw inspiration from various ideas to walk our path to success, which to us means building bridges among people, cities and countries. We are bringing together rich history and the potential the present world has on offer. We aim at showing the wonders that craft beer does. 4 medals and top4 of all times confirm high beer quality and the concept behind our business.

The awards and certificates won by the pub and Michał Czekajło, the chef of our kitchen, have opened up gates to collaboration. We’re exceptionally well prepared to educate and build taste awareness. Concept Stu Mostów has had a great launch. It’s wonderful team allows for developing beer culture and bringing together craft beer enthusiasts.

Exporting our beer has been very successful. We’ve started to export our products to Germany and Czech Republic, highly demanding markets in many respects. This year we’ve expanded our export over Austria, the Netherlands and Russia. Our greatest Christmas wish has been for our beer to be available in the United States. We’ve landed the deal. Export begins in January 2017.

High quality is our constant priority. We’ve been working hard to meet high standards beginning with the very first investment decisions. We’re proud to have the first in Poland HopGun, or a licensed system for dry hopping. Beer is hopped equally throughout the tank while the hop aroma works to its maximum. Purchasing and importing the first in Poland HopGun is just the first stage of the planned investments. The bar has been set high: innovations and development. HopGun and big investment in 2017.

To learn more about the brewery, the magic of craft brewing, building bridges, and the year 2016 in review read an extended interview at: http://wroclife.pl/blogi/opowiesci_browarnikow_browar_stu_mostow/

Our plans for 2017 are ambitious. We’re planning to free WRCLW from commercial beer. We want to educate more, integrate more, and support every initiative that would help us reach that goal. Go WRCLW!

Learn more about our ambitious investment this Thursday.