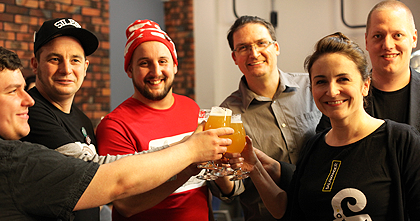 ART#6, a collaboration between Hundred Bridges Brewery and the culinary collective Food Think Tank, is primarily a combination of tradition and new wave madness and complete openness. Food Think Tank is known for lacking any specific definitions, more so, they are a new kind of initiative, bringing together specialists in many areas with one goal – to restore the quality of the food preparation and serving. We decided to use their thinking, and create a beer that will be simultaneously associated with traditions, roots, but also have an element of modern thinking. Here is the recap of our collaboration:

Michał Czekajło and Mateusz Gulej, our brewmaster, explained that the beer, brewed with the culinary collective Food Think Tank, combines the characteristics of grain and rustic taste of a spelt beer; bitterness and aroma of German and American hop varieties and unusual flavour – carrots. Carrot juice with apple and honey was the foundation of an essence created by the Food Think Tank added during maturation of beer.

Tomasz Hartman from FTT talked about how we joined forces to raise culinary awareness, draw upon tradition and enrich it with novel and surprising ingredients. We wanted to provide a thought-provoking experience. For some, this spelt beer has brought back the nearly forgotten traditional taste whereas for others the surprising ingredient – carrots – was the main point of reference. As Hartman said, FTT has shown an unconventional approach to beer whereas brewers their expertise in brewing it.

Hartman also discussed the experiences of collaboration among two different work cultures (Hundred Bridges Brewery and FTT) comparing it to the relations among the members of the FTT collective where everyone is an expert in their field, working on what they specialize in, developing their skills at their own pace. Everyone contributes their best and takes what they need in return. That’s what our collaboration was based on.

It’s worth remembering that before the actual brewing process took place, our brewers did some experimental brewing which resulted in choosing the ingredients and dishes to be served with the beer. There was also a lot of discussion about the roots of flavours and what food to serve with beer.

Arletta drew our attention to the exceptional label, available in four versions, created with a stamp made of carrots used in the brewing process. It was designed by Studio Graficzne Plantacja, which supervises the visual identification of the Brewery’s and our three beer brands. Here is the video on how the label was created. More details available on our Facebook profile.

The inspiration for the style was the rustic Dinkelbier traditionally brewed from spelt malts, one of the oldest grains grown since the Bronze Age. The surprising and refreshing ingredient that we added to this hazy beer during its maturing process are new wave hops. What’s more, Food Think Tank added their unique combination of roasted carrots, apple juice and honey.

The spelt malt produced from the spelt wheat (Triticum spelta L.) is one of the oldest grains. Today it has mostly been replaced by wheat malts. Spelt malts are rich in protein which makes beer brewing challenging. At the same time, spelt accounts for the beer’s beautiful haziness and thick foam. Contrary to wheat malt, Spelt has its own unique, more grainy and spicy, aroma.

Although hops are usually not the most significant ingredient of Dinkelbier, they certainly are when it comes to our version! The beer is slightly more bitter than the style could suggest. The new-wave German hop, Huell Melon, added during the maturing process allows for a surprising and refreshing aroma of honeydew. On top of it there is the taste and aroma of roasted and honey caramelized carrots added during the dry hopping process. The outcome gives the impression of thickened carrot, banana and melon juice. Well, perhaps with a touch of bitterness.

As a special variety of the wheat beer, Dinkelbier is served in a tall glass with a narrower stem which highlights the beer’s haziness. Best serving temperature: 6-8°C.

Our kitchen was kept busy. By far the meal of the night was the carrot soup. The best dishes to be served with the ART Dinkelbier are undoubtedly duck breast in chocolate sauce on carrot-ginger puree or light chicken salad. As for desserts, watermelon or honeydew sorbets are best bets. Another good idea is to taste the beer with fresh goat cheese or cottage cheese.

It definitely was an unforgettable debut. We hosted guests from as far as Bavaria in the west and Lublin in the east. The event will be long remembered by everyone who attended. If you missed the premiere night, visit us to taste it!