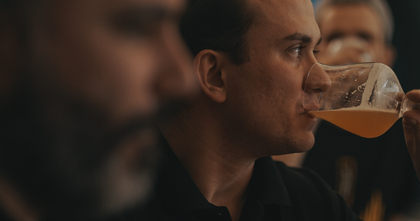 Browar Stu Mostów is getting ready for the annual Beer Geek Madness. Each year, the beer festival is organized around a different theme. This year’s edition is going to explore the topic of “RAGE.” On top of Polish craft breweries, the festival is going to host special guests: breweries from Great Britain and Ireland as well as the USA. This year we are offering an even wider range of craft-related activities to involve all craft beer enthusiasts in this extraordinary event.

We are going to present our latest brews at Zaklęte Rewiry on Krakowska Street located in a beautiful industrial building made of red brick where the festival is taking place. Here they are:

– Salamander Lemon Blueberry Muffin Ale NITRO – by all means, it’s an unusual fruity beer. The foundation is the Best Bitter style, a classic top-fermenting British beer. Traditional, refreshing, with a malty profile, caramel tones, and bitterness produced by continental hop varieties to balance pleasantly yeasty ester profile. To enhance the blueberry muffin flavour, we have increased the beer’s fullness and added vanilla sticks and dry lemon. Thank to nitrogen infusion, everyone may enjoy a pint just like from a British pub.

– ART+24 DDH DIPA Oat and Spelt brewed in cooperation with a dry brewing expert, Alex Lawes, the founder and main brewer at Whiplash brewery from Ireland. We have decided on a unique grist made of nearly 30% oat and spelt malts, which give the beer its hazy and velvety texture. The strong process of double dry hopping with such highly aromatic hop varieties as Simco, Mosaic, and Galaxy has produced exceptional juiciness and fruity hoppiness. Find out more at https://100mostow.pl/blog/2019/03/13/piwo-w-puszce/

The big event before Beer Geek Madness not to be missed the Beer Inspired Dinner, or culinary cooperation between Stu Mostów and City Social. On Thursday, March 21, all interested beer enthusiasts will have a unique chance to experience foodpairing during our beer-inspired dinner, where we are going to show that beer has a more important role to play than that of a drink to go with the dishes. This is the reason why to create the menu we have exchanged experiences of brewers and chefs of Browar Stu Mostów and that of Daniel Wełna, the chef of a Michelin-star awarded London-based restaurant City Social. Find out more at https://www.facebook.com/events/1941586309284936/

Feel the atmosphere of the British Isles and the approaching Beer Geek Madness! All day at Pub Stu Mostów on 2 Długosza Street we are serving a special menu designed in cooperation between Michał Czekajło, chef at Browar Stu Mostów, and Daniel Wełna, chef at City Social in London. Don’t miss a chance to taste our new release ART#24 DDH DIPA Oat and Spelt brewed in cooperation with Whiplash from Ireland, and the following beers from British breweries:
– Wylam Bamboo & Pineapples – DDH Pale Ale – a collab between Wylam and Odyssey Brew. Dry Double Hopped Pale Ale based on a mix of Amarillo, Mosaic and Simcoe hop varieties. Refreshing, juicy, hoppy.
– Track Mosaic – Table Beer – a rediscovered IPA: very light and very hoppy to celebrate any occasion. Hoped with Mosaic to produce an aromatic mix of mango, citrus fruit, and resinous tones.
Don’t miss the canned edition of Wylam Fruits of Perception – Lager acidified with lactic acid bacteria with kiwi, cucumber, and honeydew melon. Refreshing, dry, drinkable.

TAKE A TOUR AROUND THE STATE-OF-THE-ART CRAFT BREWERY

Get to know the craft beer production process from the grain through brewing to bottling. Learn the difference between craft brewings and mass production. Have a closer look at the state-of-the-art craft brewery and its technological equipment, which allows for production of a variety of beer styles: classics, new-wave, fruit-based, NITRO, or aged in oak barrels.
We are giving tours around the brewery every Saturday at 4:00p.m. On the Beer Geek Madness Saturday on 23 March, we are offering as many as three tours at 12:00 p.m.; 2:00p.m.; and 4:00 p.m.
Sign up today at https://100mostow.pl/zwiedzanie/