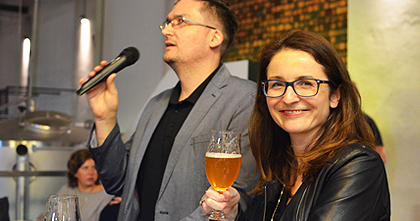 Thank you all for a fantastic weekend and birthday wishes!

Today marks the second birthday of Browar Stu Mostów. It’s been a successful year both for our team and the city itself. As the city of good beer, every year Wrocław makes its beer offer even more attractive. We feel that craft beer has been enhancing the process of rediscovering our identity. The City of Good Beer has been booming. Craft beer is one of the city’s trademarks and is becoming one of the reasons why people visit, work and live in WRCLW. It’s common knowledge; no rankings required. Each and every debut of our beer opens up an opportunity to celebrate craft brewing in WRCLW.

It’s been a fantastic weekend crowned with the debut of SALAMANDER Imperial IPA. The style is stronger than AIPA in every respect: more extract, more alcohol, and, most importantly, more hops! Lower body than one might expect from such extract; lower maltiness, and light grist highlight the leading role that hops play in Imperial IPA. We used an abundance of the best American hop varieties to achieve the bitterness, aroma, and hopping at the stage of separating hot deposits and the aging process. The produced effect are overwhelming fruity, resinous and hoppy tones.

As the name suggests, Imperial IPA is one of the most powerful beers. The numbers speak for themselves. The 19% extract means that it is a beer to be cherished at slightly colder nights. To top off the high initial extract, maltiness works as the background for the beer’s gigantic level of hoppiness. It’s the reason why the grist was made of light malts only. A small percent of sugar added increases the beer’s dryness and gives the floor to new-wave hops.

Imperial IPA requires hops to be filled to the very brim. While brewing this style, the equipment’s capacities are often used to the maximum: hop jacks break down and installations get stuck with hops. Such intense hopping allows for the necessary bitterness to balance the beer’s power. And yet, the one thing Imperial IPA is known for is its hoppy aroma. We’ve used mostly new-wave hop varieties, Calypso and Eureka, that have recently been used only as experimental hops. Calypso is an exceptionally fruity variety with a dominant tone of green pear enhanced by tropical fruit followed by apple and mint hints. Eureka, on the other hand, has a citrus profile with a touch of peach, pine, mandarines, black currant, and a herbal finish.

Taking into account its intensity, it is a challenge to suggest foodpairing for Imperial IPA. Most dishes are dominated by such a powerful beer. Here is the general rule. Dishes that pair with American IPA should also match its fortified version on one condition: the food should be spiced up even more. Bitterness enhances salty and umami tastes, which, on the other hand, balance bitter flavours. Hoppy beers are a great match for oriental cuisine. Here is a perfect dish: steamed roll filled with crispy vegetables and shredded beef in a slightly stronger BBQ sauce. As for cheeses, choose the sharp ones such as the strongest varieties of Roquefort. Their spiciness will be enriched by the bitterness of Imperial IPA.

Hardly do we offer desserts with Imperial IPA, but if you decide to do so, go for the more distinctive ones offering a wide range of flavours. Just to make desserts a bit lighter, add a layer of sourish fruit such as black berry mousse. Another interesting choice would be a ricotta cheesecake with ginger pastry coated with salty dulce de leche. Try the one made by Concept Stu Mostów. More about this delicacy at: https://100mostow.pl/produkty-specjalne/

To learn more about gift sets including SALAMANDER Imperial IPA and our dulce de leche, go to: https://100mostow.pl/blog/2016/11/08/prezent-na-wrclw/