New Summer Menu
to go well with our summer beers 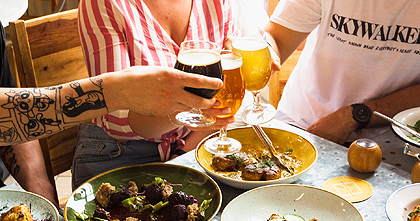 All dishes on our summer menu are prepared on the spot from fresh produce. They go perfectly well with the beers on taps. Visit the Brewery to taste our new summer menu! What we are going to serve in the hot summer months are refreshing dishes such as roasted chicken served with cucumbers and lemon balm sauce and wild salmon in leek and roasted sesame sauce. We are here to recommend beers that go best with each of the items on the menu to enrich or balance flavours. The menu includes our guests’ favourites: malt pretzels, new liver dishes and seasonal beer stakes.

One of the snacks offered in the summer season are maturing sirloin and parsley potato croquettes, a typical Portuguese dish inspired by the culinary collaboration with Taszka during the release of WRCLW Rye RIS Porto and Bourbon Double B.A. 2017. Potato croquettes, brine sirloin maturing at Concept Stu Mostów and fresh parsley are a perfect match to our Salamander Pale Ale.

Another dish on our summer menu is roasted chicken with cucumbers in lemon balm sauce. Roasted slowly in a sauce, the chicken is then shredded and served with cucumbers for a refreshing effect. This dish pairs well with WRCLW Pils to achieve a balance between grain flavours of the beer and the aroma of roasted meat. The initially distinct taste of poultry is balanced with hop bitterness.

One of the most interesting dishes is goat meat served in red wine sauce with fresh cabbage and nettle bread. The meat is provided by a qualified local producer from Koziołkowo. We offer their goat cheeses at Concept Stu Mostów. Distinctly flavoured goat meat is served as meat balls with fried cabbage in oily sweet sauce. What goes well with meat dishes are more bitter beers that enrich a bit heavier dishes such as Salamander AIPA or Black IPA.

The most impressive dish is wild salmon in leek and roasted sesame sauce. Served in whole, the fish comes from the most natural production in the world using Polish geothermal Walters. The fish is served in super creamy and slightly peppery leek sauce. Our WRCLW Hefeweizen is the best choice for Fish dishes.

A full summer menu at https://100mostow.pl/kuchnia-browaru-stu-mostow/