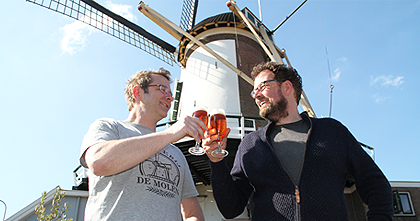 Collaborative brewing with De Molen is yet another step forward on the Beer Bridge that has supported out export to the Netherlands. De Molen is a world-class and internationally renowned brewery. They are coming to Poland for a series of tap takeovers and in order to brew in WRCLW. For them, the Polish market is interesting and important. De Molen usually brews Imperial Stouts in collaboration with other breweries. We are planning to brew something stronger. Join us to cheer. We are organizing a Tap Takeover and Meet the Brewers featuring John Brus and a team of our brewers. We are going to talk about striving for perfection, overcoming barriers and our collaborative brew, of course.

The Tap Takeover looks very promising. Brouwerij De Molen is famous for its wide range of ales, stouts, and smoke beers in imperial and aged variants. They are usually brewed in limited editions or once a year. On Długosza Street we are going to serve barley wine and Russian imperial stouts along with the highly praised APA and IPA.

De Molen is yet another famous Dutch brewery to cooperate with Browar Stu Mostów. We have been cooperating with Jopen for years. We shared the story of the brewery from Haarlem, which is passionate about rediscovering historic recipes. Our collaborative project include Rye Baltic Porter (2016) and ART#15 Vanilla and Chocolate Hot Scotch Ale (2017). Today we are meeting De Molen to take our Beer Bridge with the Netherlands to a higher level. This couldn’t have happened in the world of commercial brewing. Here lies the difference between craft brewing and commercial production. Be ready to taste the differences in the final product. Join us! Browar Stu Mostów & De Molen.

More about our mission at https://100mostow.pl/en/beer-bridges/