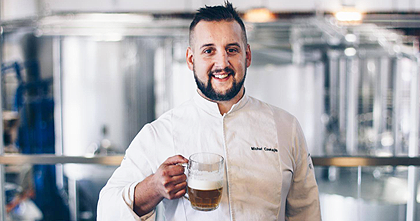 As part of the New Epiphanies Festival, Michał Czekajło, the chef of Browar Stu Mostów, is going to co-create an exceptional dinner prepared with underrated culinary ingredients at the Ujazdowski Castle in Warsaw on 27 February. The curator of the event is Monika Kucia, an ambassador of the Polish cuisine, as usual taking on a non-conventional performative role.

Michał is going to give a culinary show and present dishes prepared on the basis of brewing byproducts. He is going to serve bread, spent grains cookies, bread soup, whey drink, salty vegetable peels and aspic. Witold Pietrzak, PhD, an expert from the University of Life Sciences in charge of edible mushrooms grown in brewers grain, is going to be his partner. Filamentuous fungi are fully nutritious ingredient and one of the attractions of the diner. More details below.

Browar Stu Mostów promotes brewing culture and culinary identity of WRCLW, Lower Silesia and Poland. Craft brewing has become an integral part of a wider discussion regarding flavours. We support and integrate brewers and producers of local produce. We have created Concept Stu Mostów, a creative space where brewers, chefs, bakers cooperate every day. As craftsmen, we promote high quality, respect for ingredients, and their optima use. The Zero Waste philosophy involves a conscious reduction of waste. We have a very practical approach. Brewing wart, malts, brewers grain are used to produce pretzels, bread and mustard. Such practices are common among brewers from all over the world.

Learn more about the beginnings of the meetings at Kwestia Smaku in 2014 – https://youtu.be/pnBKS9Jr9A8
More about Beer Bridges, 2017  – https://100mostow.pl/piwnemosty

Living the zero waste lifestyle means producing as little waste as possible without affecting the environment. The practical everyday rules of the zero waste lifestyle include: refuse, reduce, reuse, recycle, compost. Zero Waste goes along the lines with minimalism, environmental awareness and ethical lifestyle. We support everyone who raises our awareness regarding zero waste. We have shown how to reuse brewing byproducts as precious resources that shouldn’t be wasted. Visit the Brewery and Concept, take a tour organized every Saturday, and learn the difference between craft brewing – https://100mostow.pl/zwiedzanie

If you are a fan of zero waste, join the group exchanging experiences, examples, texts, films – https://www.facebook.com/groups/zerowastepolska

The idea behind the New Epiphanies Festival

Traditionally, Lent used to be the period when cheap and otherwise underrated ingredients such as peels or root vegetables, fermented or dried produce were used. The slightly wrinkled celery root can make a royal dessert while wild plants make wonderful and warming liquors. The Poverty’s King dinner is going to be prepared by Michał Czekajło (a member of the Food Think Tank), who runs the Zero Waste kitchen at Browar Stu Mostów in Wrocław. Michał Czekajło and Witold Pietrzak, PhD, from the Institute of the Fermentation Technology and Grains at the University of Life Sciences in Wrocław are going to grow edible mushrooms The final cake is going to be served on porcelain designed by Alicja Patanowska who uses waste from the Kristoff factory. Tickets at http://noweepifanie.pl/wydarzenia/bieda-krol/
Facebook: www.facebook.com/events/1969365076715496

A journalist and culinary curator, promoter of top-end Polish products, designer of culinary expeditions around Poland and study trips: Culinary Trips to Poland. Her “Siała Baba Mak” is a platform for culinary and cultural activities. She organizes events, cyclical meetings, publishing and artistic projects. She is a member of the Programming Council of the New Epiphanies Festival and the European Festival of Flavours in Lublin; a scriptwriter and performer of unconventional culinary events being part of the Lent Festival New Epiphanies. Well-known from the Polish Cuisine at Nowe Horyzonty Festival, a series of meetings dedicated to the best Polish culinary traditions. We are going to show the potential of craft beer and creativity of our cuisine. We’re going to talk about culture, nature and flavours. Meet us at the table with the company of Monika, who guarantees the highest standard. More information at  http://monikakucia.com