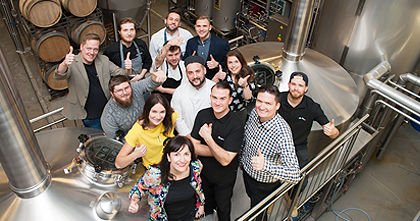 “Outstanding 3 years”; “state-of- the-art technology”; “plenty of tanks”; “impressive and visionary”. These are some of the comments that fans of the Brewery have made at our birthday party. “Fantastic fruit beers”; “prestigious collaborations”; “commitment to building Beer Bridges” said our partners and commentators who follow our premiers and activities. These comments sum up the last year. In our year in review we are going to focus on the bigger picture.

The core offer of Browar Stu Mostów includes 7 beers: SALAMANDER Pale Ale, AIPA, Black IPA; WRCLW Pils, Roggenbier, Hefeweizen; and this year’s debut WRCLW Schöps whose recipe has been recreated. Schöps was one of the main attractions during the “Europe at the Fork” festival, the biggest culinary festival in Poland. Schöps received the title of the „Lower Silesia Product of the Year” and as such was the only beer showed and served on the main square. Mateusz Gulej, Michał Czekajło and Robert Makłowicz gave an unforgettable show. The brand has gained a momentum thanks to its barrel aged version: WRCLW Schöps Smoked Plums Rum BA. Our dream to have it brewed in Wrocław on regular basis has come true. Today a big tourist attraction, Schöps is available 356 days a year in many pubs, restaurants and hotels.

Our core offer includes light and very dark beers, barley, wheat and rye beers. This is where we achieve our targets. We focus on our goals, education, foodpairing, supporting business partners. The success is visible on taps and shelves. More information in the updated Beer Map – https://100mostow.pl/piwna-mapa/

Strong bridge between beer and fruit. We are one of the most experienced breweries that have used fruit in beer brewing. The Berliner Weisse and Milkshake IPA series have expanded. For us this is more than another trend in the Polish craft brewing. We have concentrated on what has a huge export and image potential. We have established cooperation with fruit producers. We have embarked on the mission to bring these two groups of professionals together. We promote craft. We want producers to know that the brewing industry is a good partner. Craft brewers need high quality fruit and knowledge of fruit varieties. Together we want to make interesting beers that will show the Polish character, taste great and promote Polish flavours. Talented brewers and knowledgeable farmers are our international trademark.

This years most awaited beer of the Berlin BRLO Brwfest, ART#8 Strawberry Berliner Weisse has set the trend for brewing fruit beers. This beer has created strong foundations for the success of ART#9 (three gold medals of RateBeer Best Awards, February 2017). SALAMANDER Blackcurrant Berliner Weisse has been promoted in cooperation with the Polish Association of Black Currant Farmers and its fame has spread as far as New Zealand. Cooperation has brought its fruit. More information at http://jagodnik.pl/czarne-porzeczki-jednocza-producentow-owocowbrowarnikow

As part of the Beer Bridges project, we keep on exchanging knowledge with leading European breweries. This year’s projects have tightened our cooperation with strategic partners. The Beer Bridges project means more than collaborative brewing and exchange of experiences. The goal is to enrich craft beer culture and promote both countries. What we establish is a “culinary bridge” as well in order to show the heritage, brewing trends and traditions. Collaborative brewing in WRCLW opens up the opportunity to show the origins of the Polish craft beer revolution and the 800 years of brewing traditions. We organize Meet the Brewers, tap takeovers, and give presentations in the best multitaps both countries. Our mission is to show craft Poland from Lublin to Poznań. We discover the magic of the Polish Capital of Good Beer, the oldest and most popular Wrocław Good Beer Festival, Oktoberfest Alternative and Beer Geek Madness. To learn more about the Beer Bridges between Poland and Spain, Netherlands, Scandinavia and Bavaria, go to https://100mostow.pl/piwnemosty

Complex investment project implemented. Our investments have improved the quality of produced beer at every stage of its production from picking hops to bottling. The quality of hopping has improved thanks to HopGun, and a centrifuge right after fermentation. Then, flash pasteurizer and professional bottling. This is the first state-of- the-art monoblock in the Polish craft. The interesting thing is that it is really compact (it needed to be squeezed into limited space in a historic building). What we have at our disposal is a wide range of technological advances unusual for this class of breweries. HopGun has facilitated not only hopping but also adding different ingredients. As such it has taken our quality a step forward.

We have eliminated the risk of lowering quality and improved the stability of the offer, which is the key to providing constant availability of the beer and its expansion on foreign markets. We are able to brew more interesting beer styles. The new tanks of 20 to 60 hl facilitate storage and production of more varied beers. We can offer a wide variety of fresh beers at the same time. The continuity of supply is not a problem anymore. Smaller tanks have enriched our Barrel Aging Program that has been developing really well. WRCLW Barley Wine Rum BA, aged in oakwood Jamaican rum barrels has received a number of positive reviews. We have joined the cooperation between the world of beer, wine and rum by supplying the official beer of the Wrocław “Rum Love Festival”, the most important rum festival in Poland. We are planning for the aged beers to be of even higher quality. Another thing that will let us use the brewery’s potential to the full would be the ability to combine different tanks in order to produce a more interesting effect.

We have equipped our tanks with solutions unique on the European scale. We are driver by curiosity and the awareness of the pace at which the craft industry has been developing. Taken the above into consideration, we expect more pioneer solutions in 2018.

Foodpairing becomes our signature trait. By bringing together the passion of brewers and chefs, we create outstanding beers to pair with outstanding dishes. We run tests at Concept, our creative space where brewers, chefs, bakers, cheesemakers exchange their knowledge. Every dish (except for breakfast) is paired with beer recommendation. Ever beer comes with a recommendation of snacks and dishes. Every beer style has something to offer. Good foodpairing enriches flavours of both the beer and the dish. We want our customers to learn these rules and be brave to break them at times out of curiosity. That’s what we often offer to our guests. We have come up with the idea of the Dinner at Concept. The dinner is prepared from local products and products prepared in our workshop. The menu is always seasonal. Now at the end of the fall season we offer carefully selected beef, chevon and sturgeon. One of the attractions of the dinner is a tour of the Brewery, beer sampling, and gifts for our guests. More details at https://100mostow.pl/blog/2017/11/13/jesien-2017

The trademark products of Concept, beer pretzel and wart mustard have been awarded the title of “the Best Flavour of Lower Silesia.” Our team of chefs and bartenders have achieved a fantastic success. The Brewery has received yet another recommendation by the Gault&amp;Millau Polska culinary guide and the yellow Toque (in November 2017 for the forthcoming year of 218). It’s a great success for a pub. It is just one more reason to feel the atmosphere on Długosza Street and taste the difference. If you can’t make it or want to do it just now, watch the video by Have a Bite Wrocław:  www.facebook.com/HaveaBiteWroclaw/videos/1514093005348393

The craft industry in WRCLW has been recommended by prestigious guides and airlines. First Ryanair; now the brewing traditions are promoted by Wizzair 2017/2018. We couldn’t have imagined a better present for our 3 rd birthday. 5 million people in 40 countries are going to learn that Wrocław is the Capital of Good Beer. This is how many WizzAir travelers read their bimonthly magazine distributed on every single WizzAir jet. They are going to read about Wrocław as one of the most attractive craft beer destinations in Europe thanks to the role that beer has always played in the city and in the life of its inhabitants; the story of new-wave beers, the power of the people of Wrocław; the number of brewers and students; Wrocław Good Beer Festival; excellent pubs and multitaps; our commitment and
cooperation. The electronic version available at http://wizzmagazine.com, more details at our
website https://100mostow.pl/blog/2017/12/08/wizz-air

What an amazing year it was! Thank you for your wishes and gifts. On top of the recent article in the Wizzair magazine, we have received so much. We were selected as the ‘Top 30 Most Creative in WRCLW” (2017 edition) – https://www.wroclaw.pl/30-kreatywnych-wroclawia/2017/browar-stu- mostow.html – and the award of the “Lower Silesia Gryphon”. We were awarded in the National Forum of Music packed with audience. As we reflect on the passing year, it is apparent that we draw benefits from expansion and investments. We can meet requirements of a wide variety of customers. Our export has been gaining momentum.

We are about to conquer new markets, to take over taps and win international festivals. It’s time to announce our availability across the English Channel. And it’s just the beginning.

Our wish for the new year is for the craft market to grow beyond the 2 or 2.1%. We hope to look from a broader perspective and perceive the craft industry as one of the treasures of the Polish food sector, not to mention the identity. We have high hopes for the craft sector in 2018. We have become members of the first in Poland Lower Silesia Association of Craft Breweries, whose mission is to expand market share.

We follow the trends and realize that the ethical values support our standpoint. The monopoly of corporations will not stop the growth and popularity of craft breweries. The awareness of consumers and HoReCa managers has been on the rise. The world is engulfed in a revolution https://100mostow.pl/piwna-mapa

What an amazing year it was! Merry Christmas! Happy New Year! #goWRCLW #zaWRCLW