Fasten your seatbelts
Setting off to celebrate
our 3rd anniversary 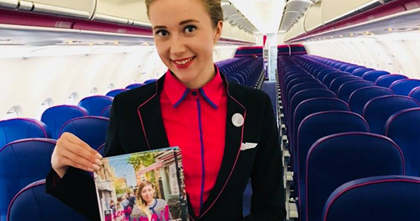 Here is the best gift we could imagine for WRCLW. 5 million people in 40 countries are going to learn that Wrocław is the Capital of Good Beer. This is how many WizzAir travelers read their bimonthly magazine distributed on every single WizzAir jet.

Wrocław has so many assets that the whole world should learn about them. The article in the WizzAir magazine shows Wrocław as one of the most attractive craft beer destinations in Europe thanks to the role that beer has always played in the city and in the life of its inhabitants; the story of new-wave beers, the power of the people of Wrocław; the number of brewers and students; Wrocław Good Beer Festival; excellent pubs and multitaps; our commitment and cooperation.

Wrocław has been presented as a prosperous and open city with a beautiful square and one hundred bridges. It used to be the City of Culture in 2016 which is growing into its role of the Capital of Good Beer. Wrocław is famous for its craft beer events, already 7 craft breweries, the largest number of home-brewers in Poland, craft chefs and producers of regional products. We shared our story of how beer has become an integral part of Wrocław and of a bigger debate on flavors. Our Brewery has taken the debate forward. We support numerous local initiatives, integrate former employees of Wrocław breweries and educate consumers.

We have promoted craft as a natural evolution in the city where beer used to be brewed for 800 years. The city is getting back to normal: people can have beers but no headaches; people can gather together, go out with families, just like in so many foreign countries where local traditions have been preserved. The authors of the article have underlined the role of Czech and German influences on the development of the Polish beer culture. They have used our press materials on WRCLW Schöps, the beer that makes “life and death sweet” and that is “wonderful food for the entire city.” They have quoted historians and chroniclers.

Reviving the craft beer culture is what motivates us. This is the reason why we have established a close cooperation with brewers and historians to recreate the taste of WRCLW Schöps, a genuine beer of our city. We are inspired to build long-lasting bridges between people, cities and countries; between traditions, present day and the future.

What a wonderful gift! The first present of this kind was given to us by Ryanair in March 2015 when they added Browar Stu Mostów to their Taste of Travelling. Today Wizzair joins the long list of magazines and tour operators that recommend our site. We have jointly embarked on a mission to teach the pronunciation of “vrots-wav” and spread the news of Wrocław as the City of Good Beer. GoWRCLW! Cheers to the 3rd anniversary of the Brewery! Cheers! Here is a link to the electronic version of the article: http://wizzmagazine.com/

To trace back the story of the Brewery, please read our Manifesto published 3 years ago: https://100mostow.pl/manifest/