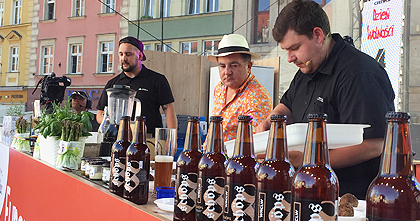 As we have already announced, WRCLW Schöps has taken part in the 2017 competition for “The Best Product of Lower Silesia.” The beer has been awarded the first place. The competition aims at fishing out and promoting the best regional and traditional products and culinary produce from the Lower Silesia Region. The evaluation was based on the following criteria: taste, smell, look, quality of ingredients, extra ingredients, preparation methods. The finale took place in AKROPOLIS – TAVERNA on 3 June. The organization of the competition was supervised by Jan Babczyszyn – the Chairman of the Polish Taste Academy. The competition in the category of “wines, meads, beers, ciders” was really fierce. Thank you for your support!

We have highlighted the exceptionally of Schöps. On Saturday loads of visitors have been told the story of the beer which was the wheat symbol of the city for years. There was a long line of enthusiasts willing to taste it celebrating the great atmosphere of the festival and the accompanying weather.

We couldn’t be happier. We’ve emphasized that Schöps stands not only for a unique beer style but also for the history and identity of our city. We’re doing our best to promote WRCLW. Schöps has already been presented in Poland and Europe from the 2016 Trends in Brewing in Gent, Belgium to 2017 Barcelona Beer Festival. The beer allows us to revive great brewing traditions and gain the status of the Beer Capital.

Here is a handful of facts at WRCLW Schöps. The beer used to be brewed from the mid-16 th century to mid-18 th century. Over the 200 years the beer was considered as the leading one in this part of Europe. It used to be a symbol of the city which has brought it its fame. At that time, beer was an integral part of the city’s lifestyle and everyday diet. Chroniclers, historians and poets would mention the beer and its qualities. They would praise the triumph of Schöps and its unique aroma. Here are such references “There isn’t anything like it in the whole country”; the beer used to be “amazing nutrition for the entire city”; the “highly praised” beer of “the highest quality”; “the most noble style in the entire Silesia.”

More about the project available at https://100mostow.pl/projekt-schops/
More information at  http://haveabite.in/article/wroclawski-schops/