Pamplona, the home of Naparbier,
the best brewery in Spain 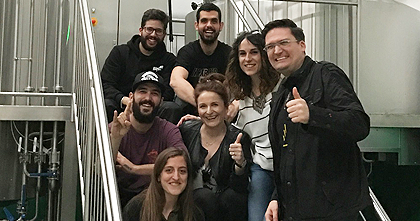 Naparbier has its brewing headquarters in Noain near Pamplona. The brewery was established in Pamplona in 2009. The town is well known for running of the bulls described 100 years ago by Hemingway in his novel “The Sun Also Rises” as well as for their love for Osasuna FC. Naparbier has been working hard to raise craft awareness in Pamplona. Starting from Pils and Belgian Ale Dunkel, Naparbier invested a lot of energy in spreading their creative and uncompromising ideas. Juan Rodríguez, who has recently visited WRCLW to collaborate on a beer project, has focused on persuading people to drink fresh beer. Alfredo Rodríguez, Javier Erro, Sven Bosch, Josu Taniñe and Alex Schmid all do their best to increase the popularity of Naparbier in Spain.

As the best brewery in Spain, they export to the USA, Denmark, Norway and the Netherlands. At the same time, they concentrate on the local market. There is a flagship pub in the centre of Pamplona on Plaza del Castillo, where excellent dishes and foodpairing helps to promote craft and explain the difference between craft brewing and commercial production.

The process of raising craft awareness in Spain has been very interesting. Many people don’t like beer; some are not used to drinking it. Many people come to pubs where Naparbier is available out of curiosity. They taste beer and fall in love with it! Even though our breweries are miles apart, we share the same stories about building craft culture among many generations, opinion-forming circles and restaurant owners.

More about our collaboration beer at – https://100mostow.pl/art-11/