3 gold medals for ART#9
and the best review online 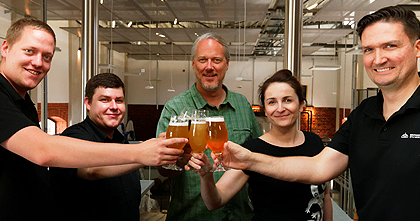 Brewed in Wrocław, ART#9 highly appreciated in the USA

ART#9 Oatmeal Hoptart brewed in cooperation with Bristol Brewing has won the title of the “Best New Beer in the World”. On top of the golden medal in the category of 2016 Best New Beers the beer has also been awarded two gold medals in the category of Germanic Tradition / Sour Ales and Low / Moderate Alcohol. The 2016 RateBeer Best Awards were announced on 2 February 2017.

We’re more than happy. “It’s a fantastic day for our team and everyone who appreciates beer brewing as an essential part of our identity. We’re so proud that beer has regained its status as one of WRCLW’s signature produce.” There are many breweries in Wrocław and beer is the trademark of the city’s identity. We’re filled with emotions: www.facebook.com/BrowarStuMostow/app/212104595551052/

It’s worked out well since the very beginning. The beer won the title of the Craft of the Month and the first place at the Berliner Weisse Ranking by Piktor. Next, it was announced the Debut of the Month of September. In the words of Michał “Docent” Maranda from PolskieMinibrowary.pl “It wouldn’t do justice to the beer’s unique taste to simply call it a new-wave version of the Berliner Weisse. The clarity of the beer is impressing: no sulphuric, milky or other tones often present in Berliner-type brews. Instead, there is the exceptionally rich and refreshing aroma of lemon, mandarine and peach. Equally exquisite is the taste achieved through the interplay of fresh lemon and slightly bitter grapefruit. Although the parameters are “low”, the beer is delightfully full-bodied and highly drinkable. Excellent cooperation between Browar Stu Mostów and Bristol Brewing Company from Colorado Springs!

Here is an even better review by Docent straight from a pub “When I finally to get the highly praised Oatmeal Hoptart from Browar Stu Mostów, the very first sniff of its peach-mandarine-lemon aroma already promised a really good beer. The refreshing tartness of lemon is perfectly balanced with slight bitterness. This complex and full bodied beer (with only 9°Blg!) is an ideal combination of the sour and bitter taste. I can’t remember drinking 6 same beers in a row. The season can’t be over. This is the beer I want to drink all year round!” Docent has shared our pleasure and joy in drinking beer.

On his blog The Beervault, Kuba Niemiec writes “the beer has far exceeded my expectations. Mateusz from Browar Stu Mostów succeeded in creating a real treat. The beer’s peachy smell combined with lemon and milky tones of lactobacillus is just overpowering. The slight bitterness is balanced with moderate acidity level. The beer gets down faster than Lucky Luke takes a pistol out of his pocket. Simply great!” As you can tell from the blogger’s vivid language, ART#9 has continued to be a source of inspiration.

Then, in November 2016, the beer was awarded the bronze medal at the 2016 Brussels Beer Challenge  in the category of Speciality Beer: Other Sour Ale. And the most current awards: 3 gold medals! In contrast to the distinctions awarded by jury at various beer festivals, the most recent medals are awarded by consumer through the RateBeer portal.

With quite a low extract of 9% and the grist of light malts only, Pilsner and wheat, the beer has gained its refreshing lightness so typical for this style. We have used the most aromatic hops from the USA and Australia – Citra, Topaz and Galaxy used in the “late hopping” method. By adding velvety oatflakes, we have created light beer soured with lactic acid bacteria. Powerful refreshment recommended for Sourheads and Hopheads! It’s definitely coming back in springtime! More about #9 on our website: https://100mostow.pl/art-9/.

Here are reviews by experts, connoisseurs and bloggers commenting the unique flavour of ART#9 and the awards the beer has won:

ART#9 rated the best beer of August at www.polskikraft.pl/piwo/browar-stu-mostow-art%2B9- oatmeal-hoptart_1663

ART#9 rated the best beer of September at https://polskieminibrowary.pl/2016/10/07/debiut-miesiacawrzesien-2016/

ART#9 wins the bronze medal at 2016 Brussels Beer Challenge 2016 at https://100mostow.pl/blog/2016/11/22/braz-dla-art9/ Thanks to talented brewers, cooperation, international appreciation, export and high ratings by beer enthusiasts from many countries. There are thousands of them at RateBeer.com. The ranking takes place ones a year. Today it’s been a lucky day for WRCLW. GoWRCLW!

Watch the beer brewing process: beginning with a 4-cylinder grinder and the moment when the malt grits is transferred to brewing vessel… Every Tuesday and Saturday. Feel invited. Bookings for February at: http://bit.ly/2kKmuEa

The best commentary on what happened at the RateBeer gala was made by one great person. He’s always smiling and spreading kindness uniting people, cities and countries. Without him, there would be no beers, no medals, no good news. He’s the one who understands the ART brand, which promotes creative cooperation between talented and open-minded people. He builds bridges between people and beer styles promoting development as open-mindedness, sharing experiences and the ability to cooperate. Craft attracts amazing people who are ready to drink better beer and learn more about its production.

He has already supported a charity organization so look at the 2nd or 3rd post from the top next to the green graphics dated on the 2 February. GoWRCLW!