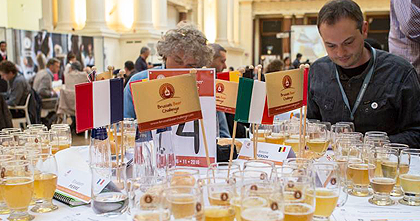 Yet another medal in November!

ART#9 Oatmeal Hoptart has won the bronze medal in the “Speciality Beer: Other Sour Ale” category at the 2016 Brussels Beer Challenge.

The golden medal went to the Brewer’s Desire produced by the Belgian brewery John Martin whose history goes back a hundred years.

The Silver medal was awarded to Prairie Funky Gold Mosaic from the American Krebs Brewing Company. Two quality certificates were also awarded in this category: one to the American Deschutes Brewery for Flanders Black and another one to the Canadian Le Trou du Diable brewery for their Le Hérisson beer.

It’s worth remembering that last year the first medal in the history of Polish craft was awarded to our beer geek SALAMANDER Hoppy Violet Potato Lager, which won the silver medal and the title of the best beer in the American-style Pilsner category. To find out more, go to: https://100mostow.pl/blog/2015/11/11/dla-beergeekow/