WRCLW Schops – the wheat symbol of the city is back 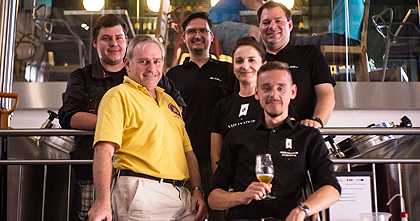 Join us for the Debut Weekend!

Schöps is the most famous beer of Wrocław whose history goes back 250 years. The premiere is taking place over the period of 5 days, from Tuesday to Sunday (25.09).

TUESDAY, 20 September, 6:00 p.m. Browar Stu Mostów: WRCWL dwellers will be the first to taste Schöps. Then, an international team of brewers, technologists and historians, who have worked on recreating the recipe for over a year, are going to present the style. Among them: Mateusz Gulej, the head brewer at Browar Stu Mostów, and John Brauer, the Brewers of Europe, as well as ambassadors of the Schöps projects representing 5 districts of the town, WRCLW brewers and international brewers representing over 25 countries.

At night, participants of the EBC Symposium will taste Schöps. The EBC Symposium is a European meeting of scientists and technologists taking part in Poland for the first time in history.

THURSDAY, 22.09. Schöps available in pubs and multitaps in Wrocław. Concept Stu Mostów is preparing an additional attraction in the form of Schöps-based traditional pretzels topped with cumin and salt. The beer will also be distributed outside Lower Silesia.

WEEKEND, 23-25. 09. Schöps available in the best multitap bars in Poland. Here is the most updated list of places offering our beers: https://100mostow.pl/piwna-mapa/

The project to bring back the beer symbol of the city to their people follows actions taken by brewers, beer enthusiasts and city dwellers. Beer is definitely part of the city’s identity and history. Brewed between mid-16th and mid-18th century, Schöps was considered the leading beer in this part of Europe. The recipe was recreated on the base of our knowledge on what the brewing industry of those times looked like and the experience of the best specialists in the sector. “As craft beers, specifically the ones dominated by the IPA styles, are becoming more and more popular, it is worth paying attention to the beers brewed by our ancestors. These beer styles played an import ant role in their lifestyle and everyday activities. One of such styles is Schöps, the strong wheat beer that used to be brewed before. Reactivating the style, Browar Stu Mostów is recreating a true legend.”– says Andrzej Urbanek, beer enthusiast and brewing expert, one of the team members that took part in recreating the traditional style. To celebrate the occasion, a special brochure on Schöps was published. It is available in city tourist information centres, city pubs and beer shops. The brochure can also to be downloaded from our website: https://100mostow.pl/projekt-schops/