We brew Schops!
An international team. Over a year of preparations. 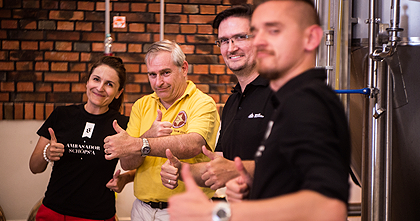 How does the style of beer from 400 years ago taste?

The objective is to brew the famous Schöps. It is something more than just a style of beer. It is a part of history and identity of Wroclaw. Today, we are reviving Schops based on the knowledge about beer brewing back then, the expertise of the best people in the industry and the yeast strains kept in German yeast banks.

As far as we know, the recipe did not survive. Moreover, Weisser Schops was brewed in many varieties and kept changing throughout the ages. However, we found hints how it tasted. Andrew Urbanek and Dr. Grzegorz Sobel played special roles here. Both are experts in old brewing and have been trying to learn as much as possible about this legendary bear for years. We searched for any mentions in books, especially in Berlin’s libraries. We also know a lot about how old brewing looked like in Wroclaw. Using this knowledge, we performed trial brewing in the Wheelhouse brewery. We analysed the beer and we drew conclusions as regards further attempts, so that the final brewing would be as much similar to the original Wroclaw Schops as possible.

Note that today, we also have completely different ingredients than in the past and it must be emphasised that they are of much better quality. At that time, malt was of different quality and was certainly darker. We have to simulate it with today’s malt palette. Fortunately, the possibilities are huge.

How can we describe the taste of Schops?

We know that it was a wheat beer. It was probably brewed only from wheat malt, which made filtering during brewing much more difficult. That is probably why dry straw which was placed in filtration tanks was used. It was certainly a strong beer whose strength equalled that of table wines. As result it was also easy to store and did not go bad with time. Most probably, it was quite sparingly hopped so the flavour was rather full, malty, sometimes even sweet. The beer was stored in and served from wooden barrels which were not sterile and could make the beer slightly acidic, which was caused by stenothermal lactic acid bacteria (which live in wood pores). Despite its sweetness, such slight acidity made Baran Beer not bland but highly drinkable. Such acidity also influenced the beer’s life as in the case of cabbage or cucumbers. More on findings after trial brewing in our special brochure  – https://100mostow.pl/en/2016/07/25/berlin-beer-week-2/

What should you know about Wroclaw Schöps?

Preparatory works started in July 2015. They were performed by an international team of brewers, technologists and historians. Ambassadors appointed in all districts of Wroclaw helped in the process. Together with the city of Wroclaw, we published a special Brochure and we jointly invite you to the première on 20 September in Browar Stu Mostów. It will take place in the presence of brewing scientists and technologists from all over Europe, the participants in EBC Symposium which will be held for the first time in Poland. The host of the meeting is Wrocław – the Capital of Good Beer. We invite you to Wroclaw! Send invitations at www.facebook.com/events/259654687702022/.