Visit Wrocław and the biggest beer festival in Poland! 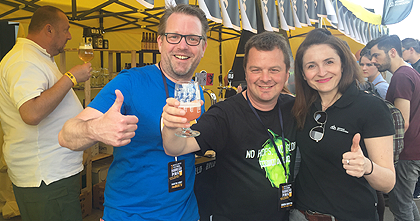 The one and only!

The Good Beer Festival is an outstanding and magical event in many ways. This is where everything started. Most craft breweries made their debuts and strengthened their market position there. The idea for the Wrocław Brewing Workshops originated. In other words, it is the oldest, biggest, and most popular festival! Let’s toast to Wrocław Good Beer Festival!

Even though craft beers enjoy rising popularity and are more commonly available in pubs and shops, Wrocław Good Beer Festival is the ultimate place to taste the widest range of beers. No other Polish festival offers such an astonishing variety: bitter, refined, roasted or caramel beers. And on top of that: our Strawberry Berliner Weisse.

Here is our full Festival offer:

Our second roll-bar will offer the debut-making and collaborative style: ART#8 and 3 BRLO beers on a rotating basis:

Get ready for a fantastic festival: 3 days, 70 stands, 400 draft beers, 800 bottled beers from 150 breweries. 3 stages: beer-culinary stage; a concert stage and a malt beach. 15 concerts. Every year the festival breaks a record in terms of visitors and breweries. There will be 70 exhibitors at the weekend of 10-12 June. Last year the number was 57, while in 2014 there were 35 including our brewery, which made an unforgettable debut as we did not present our own beer. Remember?

Sure you do! Do you remember what beer from 400 years ago tastes like? That’s what we’re working on now. We’re recreating Schöps – a wheat symbol of Wrocław mentioned by chroniclers and poets which made its mark on the lifestyle of Wrocław dwellers. For 200 years this famous beer style was considered as a leading one in this part of Europe. Schöps was brewed from mid-16th to mid-18th century. Visit our stand at the festival to learn more about the project to recreate the legendary Schöps. Feel invited!

To get more details about the festival, go to: http://facet.interia.pl/alkohole/news-7-wroclawski-festiwal-dobrego-piwa-az-40- piwnych-premier,nId,2208486