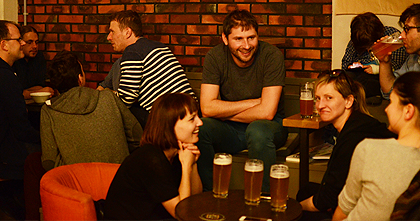 Spend the first May weekend in the City of Good Beer! Visit us to celebrate the debut of the second beer brewed in cooperation with Camba. IPL is what IPA means for lagers. We’re going to present this style in a red version with a caramel touch. The German hops, Saphir and Mandarina Bavaria, are similar to the ones used in ART#1 Doppel Weizenbock German IPA. Comparing these two beer styles will definitely take you by surprise.

It’s yet another debut as we’re already offering WRCLW Rye RIS with chilli and coffee cherries. On May 5 we’re going to present RIS with vanilla and roasted hazel nuts. Visit the brewery to taste these styles! Both bottled ART beers are available in over 100 places. Here is the map: https://100mostow.pl/piwna-mapa/

The seventh beer under the ART brand has been brewed in collaboration with the Camba Bavaria brewery. It actually draws upon the first beer brewed together: ART#1. What we added to the already strong lager based on Munich malts are caramel malts, both light and dark, to give the beer a deep red colour. Similarly to ART#1, it is strongly hopped beer. Yet, the difference in the production of lagers and ales has accounted for a distinguished character.

American craft breweries that represent a counterrevolution offering nothing but lagers have become the source of inspiration. Their lagers are far from boring. Each is of a distinct character and a special place is taken by IPL – India Pale Lager, or the strongly hopped versions of lagers. The IPL style is available in many versions: light, caramel or dark. Similarly to IPA, the IPL core remains unchanged. Since we’ve brewed the beer in cooperation with our friends from Camba Bavaria, we’ve used German hops only.

The malt base consisting of Munich malts, which give the beer its deep taste, has been spiced up with the abundance of light and dark caramel malts. They are the ones which produce the beer’s deep red colour that brings to mind the Bock style.

To make a connection with our first beer brewed under the ART brand in cooperation with Camba Bavaria, we’ve used the same hops in almost identical quantities. Taurus hops account for slight bitterness perfect for lagers. Saphir hops give the beer some flowery, citric and earthy tones that bring to mind rooibos tea, whereas Mandarina Bavaria is quite citric, slightly mandarinish, hops with quite a fruity profile.