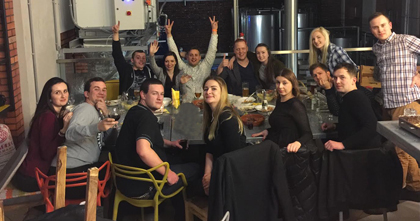 What a fantastic year it was!

The first year of our operations ended with a spectacular success. Craft beer brewed at Browar Stu Mostów won the title of the 2015 Lower Silesia Product of the Year. It happened for the first time in history. With a little help of our commitment and imagination, we have paved the way. As brewers, we were also awarded the title of People of the Year in Wrocław. It appears that the atmosphere around craft beer, which has started to strengthen our identity, has been changing.

Last year 57 breweries, including 26 stationary and 31 contract breweries, opened in Poland. The majority of these breweries (8) opened in the Lower Silesia region, including 4 in Wrocław itself. A full list is available at the Piwna Zwrotnica blog. “Wrocław is unquestionably the leader in the number of breweries located in one town”– Michał Docent Maranda, PolskieMinibrowary.pl.

The new year of 2016 will be exceptional for WRCLW. The city has been designated the European Capital of Culture, the host of the European Film Award and the EBC Symposium, the biggest meeting of scientists and technologists of the beer industry. The choice of location, which confirms the role that Wrocław plays on the global beer stage, is by no means accidental. Browar Stu Mostów will host the guests of the EBC Symposium in September 2016.

Just to give you a taste of the things to come in the New Year we’re happy to inform that Browar Stu Mostów is the first brewery in Poland to brew in collaboration with an American brewery. The first historic brewing will take place on 17 January 2016 at Browar Stu Mostów in WRCLW. Join us! More details coming soon!

Our Brewery is the first Polish member of the Brewers Association – the biggest in the world organization associating craft breweries. The collaborative brewing with American brewers just goes to show that our market has been developing incredibly fast. The growing power of Wrocław and Poland as an increasingly important craft beer market has been noticed abroad.

To learn more about our plans for WRCLW visit: https://100mostow.pl/marka-wrclw/

More information about the origins of the American revolution at: www.brewersassociation.org/statistics/number-ofbreweries/  and in a fantastic speech by do Tomasz Kopyra at: https://youtu.be/C5Wisrfq9n0

To learn more about the role of the Lower Silesia Region read a comprehensive review by Kacper Groń and Karolina Papińska at www.zwrotnica.com.pl/2015/12/piwne-podsumowanie-2015.html?zx=899a478f62842d15

More details about the dominating position of Wrocław, the biggest and most important beer event in Poland, the Good Beer Festival, available at the website run by Michał Docent Maranda at http://polskieminibrowary.pl/tag/wroclaw/ 🙂