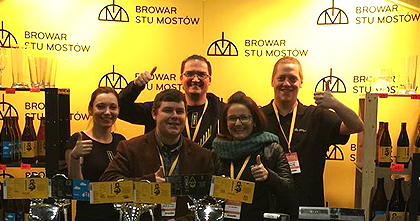 We’ve presented all our brands including WRCLW Pils and Roggen, which won the title of the 2015 Lower Silesia Product only a month ago. The WRCLW brand strengthens our identity and taste awareness. As the brand’s name contains only consonants, the products contain only traditional beer brewing ingredients. WRCLW stands for the classics in refreshed craft versions. What caused a sensation was SALAMANDER Black IPA, delivered straight from the Wrocław Beer Trail that promotes local beers served from legendary multitaps, and SALAMANDER Hoppy Violet Potato Lager brewed for the Beer Geek Madness that won the prize in Brussels. We also served our fans’ favourites: SALAMANDER AIPA, Pale Ale and the returning Wheat Porter.

Read more about our success at Brussels Beer Challenge – https://100mostow.pl/blog/2015/11/11/dlabeergeekow/

SALAMANDER is the symbol of getting together, friendship and good conversation. Salamander brand beers follow the latest new wave styles.

ART is the brand under which we tend to brew beer in collaboration with our partners. Aimed at creative people, the brand builds bridges between people and beer styles. The brand also helps us to promote craft as part of the creative capital of WRCLW, Lower Silesia and Poland.

One of the beers brewed under the ART brand in collaboration with the Neo-Nówka cabaret is White IPA. Read more about this cooperation at: https://100mostow.pl/blog/2015/10/07/art-white-ipa/

A week before the Poznań Beer Fair, White IPA won over the beer lovers from Poznań during the after party at Setka Pub. The Neo-Nówka comedians themselves served behind the bar. The beer’s hoppy aroma and intense bitterness enhanced by tropical, citrus and passion fruit accounts for an intriguing flavour. If you haven’t tasted it yet, visit us to give it a go!