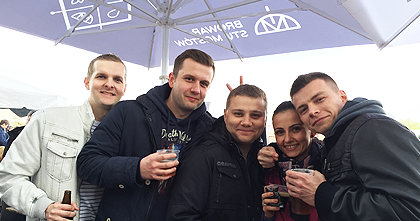 We have reasons to be proud! The Festival attracted loads of visitors and gained excellent reviews. Just take look at the headlines: “Wrocław becomes the capital of good beer”; “The Festival’s spectacular success”; “International bloggers greatly impressed”; “The biggest made-in-Poland beer festival”; “Grandeur and flamboyance”; “The most important festival on the dynamically changing beer map of Poland where Wrocław has been marked as the central spot.” The number of breweries doubled. Great organization! Happiness! Congratulations!

Here is the first media coverage:

“The 6th edition of the Wrocław Good Beer Festival has ended. Nearly one hundred breweries from Poland and aboard, including Czech Republic and Germany, presented their beers. It is the oldest and biggest festival on the dynamically changing beer map of Poland where Wrocław has been marked as the central spot.”

Drawing on the 800 years of tradition, Wrocław has been creating significant and attractive events for its today’s inhabitants. Craft beer has integrated generations of Wrocław-based brewers and attracted attention of entire Poland. On top of the Good Beer Festival, the most important beer event, Wrocław regularly hosts the elite of craft breweries during the most original beer event called Beer Geek Madness. These are one of the reasons why Wrocław gained the name of the most important city for the Polish beer industry.

Wrocław has also attracted the undisputed stars of the beer scene worldwide: Mikkeller, Camba Bavaria, The Alchemist. It is also in Wrocław where the highest number of craft breweries has been recently opened.

The Wrocław-based brewers received the prestigious title of the 2014 Person of the Year awarded by readers of the portal tuWrocław.com – it has been awarded to Arletta and Grzegorz Ziemian, originators of the Browar Stu Mostów. Craft beer is promoted as part of the city’s creative capital. The city breweries cooperate with chefs, restaurateurs and food producers. Their creative debates on taste and flavours often revolve around beer. Wrocław is also the best place to study beer production in Poland as the University of Environmental and Life Sciences in Wrocław is for brewers what the Film School in Łódź is for young filmmakers.

It’s been a year since craft beer returned to Wrocław 10 years after a well-established brewery in Wrocław, Browary Piastowskie, closed down. Aside Browar Stu Mostów and Spiż, the oldest craft brewery and restaurant in Poland, several beer initiatives have started springing up.

WRCLW Dunkelweizen – official beer of the 6th edition of the Good Beer Festival was partly created by the festival’s fans. In a survey organized by the Good Beer Festival, fans decided that the Festival Beer should be a warm-fermented dark beer brewed from Polish hops only. Following their advice brewers of Browar Stu Mostów have selected the style that perfectly combines all these elements – Dunkelweizen.

Brewed to celebrate the 6th edition of the Good Beer Festival, WRCLW Dunkelweizen is slightly cloudy. When poured into a glass, thick beige coloured foam appears. The aroma is dominated by clove and banana flavours along with caramel sensations and the smell of freshly baked bread. The beer tastes of wheat tampered with pleasant but noble bitterness. There is the somewhat acidic aroma at the finish which accounts for high drinkability and refreshing experience.

Wheat beers are demanding as they taste best when fresh. That’s exactly the reason why they are brewed by almost every German and Czech regional brewery. In this way, local beer lovers have an easy access to the freshest wheat beer available. WRCLW Dunkelweizen is a perfect beer to show why regionalism matters in craft production. It is a traditional style that tastes best where it has been brewed.

Media coverage of the Festival: http://www.tuwroclaw.com/wiadomosci,wroclaw-stal-sie-stolicadobrego-piwa,wia5-3266-24247.html

To read more about our beers visit: http://www.gazetawroclawska.pl/artykul/3728642,piwo-z-wroclawskiegobrowaru-podbija-polske-i-to-nie-piast-ktory-tylko-kojarzy-sie-z-wroclawiem,id,t.html

To find out more about the Beer Festival visit: http://100mostow.pl/dunkelweizen/

To watch the first festival reviews go to: https://youtu.be/J6oEg_Jt81o

To read more about how WRCLW Dunkelweizen was created visit: http://100mostow.pl/blog/2015/05/01/wrclw-dunkelweizen/

To find out where to buy WRCLW Dunkelweizen after the Festival: http://100mostow.pl/piwna-mapa/