Europe on the Fork

Europe on the Fork 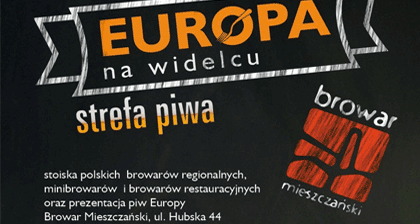 During the three days of the Europe on the Fork festival we are going to serve beer from befriended craft breweries. Visit us on Friday, Saturday and Sunday!

One of the major events on the culinary map of Europe, the Europe on the Fork food and drink festival held every year in Wrocław hosts exhibitors from numerous countries presenting their regional products and dishes. They often include craftsmen following traditional recipes and preserving high quality of their products.

For these reasons, Browar Stu Mostów, the recently established craft brewery in Wrocław, is also going to participate in the festival. We are not going to offer our beer yet – as it has already been announced, our recipes are being created and the first beers will be presented in the fall season. Yet, to celebrate the Europe on the Fork festival we are going to offer craft beer from befriended breweries that use the same technology to prepare highest quality beer. The beer has been awarded and appreciated globally – just taste it!

At our stand you’ll find Schönramer Pils awarded the golden medal at the Beer World Cup in the USA. That means that you will be able to taste the best pils in the world!

On top of Schönramer, we’ll be offering beer from the Camba brewery. Overall we’ll have several types to choose from:

Visit us at the beer zone at the Europe on the Fork festival held in the Browar Mieszczański brewery accompanied by numerous events, workshops and concerts.

As the beer zone is joined with the Wrocławski Bazar Smakoszy gourmet food market, the beer will be spiced with dishes from Greece, Italy, France or Portugal. Such an opportunity can’t be missed!

Photos from the event: