New member of the Browar 100 Mostów 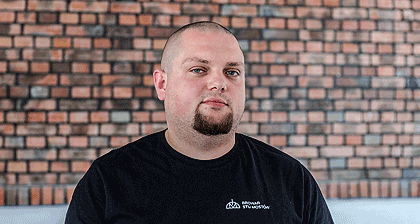 In Browar Stu Mostów we are going to brew original and natural beer based on traditional recipes. It takes work and patience but there is no other way. Our team working on the launch of a craft brewery in Wrocław has been joined by a brewer Grzegorz Ickiewicz.

The team is being put together. We are looking for people thinking outside the box but at the same time brave enough to listen to their heart and live their life to the fullest. We are not afraid of experimenting to achieve an outstanding effect, that is authentic beer.

The team of the Browar Stu Mostów brewery has been joined by Grzegorz Ickiewicz, a food technologist educated at the University of Agriculture specializing in the technology of fermenting processes. To cut a long story short, he has mastered the craft of beer brewing that he loves: I was born in Wrocław and I feel a close bond with the city. What I have missed in Wrocław is a genuine brewery – says Grzegorz Ickiewicz – When the opportunity opened up to participate in the creation of a craft brewery in Wrocław, I have realised that it is the right place for me. The passion for brewing has convinced me to join the exceptional team that’s being put together.

Ickiewicz has gained professional experience working in a brewery in Namysłów and Soufflet malt house in Poznań. He then moved up the career ladder in the Konstancin brewery and over the last two years he has been in charge of recipe building and production in Lwówek brewery.

Yet, the world is not enough! Grzegorz has now joined the team of Browar Stu Mostów to brew genuine beer based on traditional and original recipes using state-of-the art equipment and creative solutions. – We are working on the recipes for the first beers that will be launched in the fall season for the opening of the Browar Stu Mostów brewery. Some ideas for recipes have already been produced period – says Grzegorz Ickiewicz.

The first beer by Browar Stu Mostów will be available in the fall season when the one of a kind brewery will be opened. Join us today!