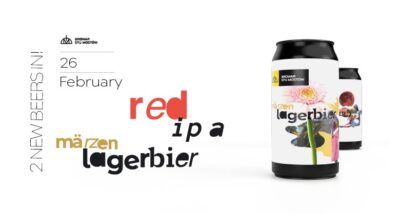 Get to know the next two seasonal beers, inspired by the current season and created to accompany you, regardless of whether you see a frosted sheet of snow outside your window or celebrate time outdoors during warm summer afternoons and evenings.

We are currently saying goodbye to winter and happily welcoming spring!

Accordingly, we would like to share its beer flavor with you in the form of two classic styles that will allow you to synchronize with the new, early spring season!

First one of them is Märzen Lagerbier, which will be perfect after a day of cycling, hiking or … on the occasion of the first bonfire with friends this season!

This is our last brew from 2020, brewed with the addition of the best quality German malts, a bit of (equally German) hops and house Lagerbier yeast strain.

The second beer brewed for this season is RED IPA, for the brewing of which we used “good, old” varieties of hops that have been with us from the very beginning of the beer revolution.

However, this beer is not about the hops or bitterness, but about balance!

We obtained it thanks to a special selection of malts filled with cookie and caramel notes. They provided the beer with super aromatic malt foundation, ideally combined with the hoppy aroma.

Both will be released on February 26!

You can look for them in shops with good craft beer, such as our brand store – CONCEPT STU MOSTÓW at Długosza 2 Street!