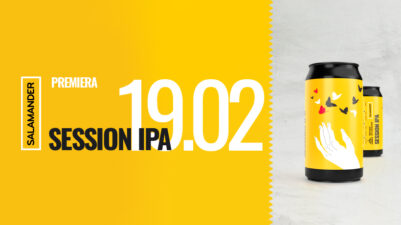 Next weekend, we will present to you not only our unique 6-pack brewed in cooperation with top breweries from all around the world, but also the new SALAMANDER beer – Session IPA hopped with a New Zealand blend of Nelson Sauvin, Motueka, Southern Cross and Pacific Jade!

Session beers are highly drinkable beers with a lower alcohol content compared to their non-session counterparts.

The session version of the IPA style was created in Great Britain during the First World War. The hardworking workers in the factories had two breaks (sessions), during the working day, during which there was a general permission to drink beer, the purpose of which was to strengthen workers’ morale.

The beers drunk during these breaks differed a lot from the porters and stouts (very popular at that time), because of the lower alcohol content and a more delicate/subtle taste, thanks to which consumption did not interfere with the employee duties.

By recreating this style, our brewers created a light malt base and add into it a lot of super aromatic hops. For this occasion, they used a specially selected blend of New Zealand hops, which repaid with an aroma filled with gooseberry, white wine and tropical fruit notes. The citrus finish adds even more drinkability and emphasizes the clean, hoppy character of the beer.

To be released on February 19!

You can look for the cans filled with this gorgeous IPA since the very morning at our company store – Concept Stu Mostów at Długosza 2 Street in Wrocław – feel invited!