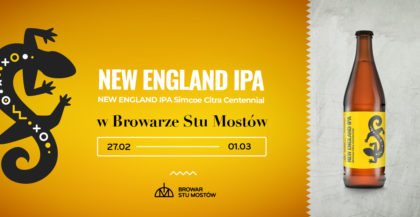 After the success of our latest beers in NEIPA style, we`ve decided to brew it again! This time it`s  going to be New England IPA hopped with Simcoe, Citra & Centennial varieties!

It`s one of the latest styles in the India Pale Ale family, which was created in Vermont, United States. Brewers from this region, against all known rules added hops during… fermentation. Hopping at this stage doesn`t usually have a positive effect on the process but in the right conditions, yeast can biotransform hop oils into slightly different compounds giving an even more intense aromatic profile!

It`s going to be distinguished by even brighter malt base with a powerful contribution of oat flakes and deep, velvety cereal flavor, fermented with a new strain of Vermont Ale yeast! Extremely abundantly hopped in a tank with a combination of: Simcoe, Citra and Centennial hops, which returned with intense citrus, lemon, grapefruit and pomelo notes with a noticeable resin and floral accent. It will be crisp, delicious and super fruity!

We invite You to join us at Długosza 2 on 27 February for the first sip!