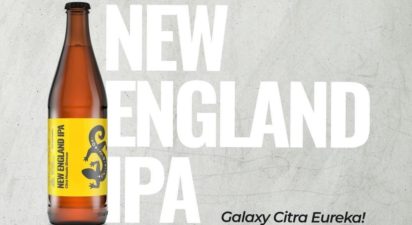 This is a hazy, aromatic and smooth beer with a deep orange color and a distinct taste. Double dry-hopping process with Galaxy, Citra and Eureka hops gave intense fruity profile, filled with notes of peach, pear, mandarin, passionfruit and grapefruit!

This is one of the latest styles in the India Pale Ale family, which was created in Vermont, US. Brewers from this region, against all known rules, added hops during fermentation process. Hopping at this stage does not usually have a positive effect on the process, but in the right conditions yeast can biotransform hop oils into slightly different compounds, giving an even more intense hoppy aroma!

After the success of the previous New England IPA from our offer, we decided to brew it again – this time using a mix of: Galaxy, Citra and Eureka hops. We have obtained a deep cereal taste and velvety texture thanks to the addition of oat flakes and enormous guantity of malts. Hops used in double dry-hopping process introduced the aromas of pear, mandarin, passionfruit and grapefruit – don`t miss the release at our taproom next weekend!