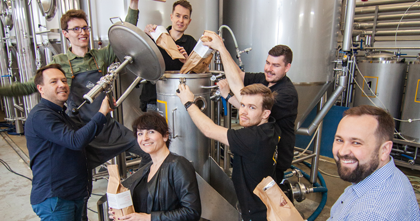 It’s high time to release our latest brew, WRCLW Coffee and Cascara Imperial Stout NITRO, designed as a new take on our strongest and thickest beer. This black and opaque beer has been brewed with the biggest amount of dark and roasted malts combined with loads of cascara and freshly ground and roasted coffee from Etno Cafe. The beer is filled to the rim with aromas of freshly brewed espresso, chocolate and caramel. With time, dark dry fruit and pumpernickel tones are released. It’s incredibly intense and designed to be sipped and savoured.

Imperial Stout is known as one of the strongest beer styles in the world. As the term “Imperial” suggests, the beer’s extract is extremely strong. There is a wide range of Imperial Stouts but these are the strongest versions that make the heart of beer enthusiasts go faster. It’s not a beer to be brewed every day. Each Imperial Stout brew is a big event for any brewery. The aged versions brewed with coffee and cascara are quite a treat, not to be missed! A mix of coffee and cascara gives beer more complex fruit aromas.

Cascara, cocoa shell beans, has long been considered coffee post-production waste. It’s been underrated for far too long. Cascara shell infusion has been known to farmers in Yemen and Ethiopia. Following the latest zero waste trends to produce as little post-production waste as possible, cascara shell has been rediscovered as a great product to prepare infusions and cold brew. It is still not easy to get hold of cascara so don’t miss the chance to taste WRCLW Coffee and Cascara Imperial Stout NITRO.

A week before bottling excellent coffee provided by Etno Cafe was added to the brew. This extraordinary coffee variety grown in Brazil at the altitude of 1150-1350 m a. s. l. This time on top of coffee, we have also decided to use cascara, which releases pleasurable aromas of red tobacco fruit and marzipan. By joining forces of Browar Stu Mostów experiences and Etno Cafe specialists, we have selected proportions of ingredients that would match this beer style well. WRCLW Coffee and Cascara Imperial Stout NITRO is a mix of 405 Brazilian intense coffee variety, Yellow Bourbon, that has the aromas of almonds and peanut butter, and 60% Cascara, coffee bean shell, that releases red currant, almonds, and tobacco. In total, we have used 8kg of roughly ground cold-brew style coffee, 10 kg cascara and extracted precious ingredients with the use of HopGun to preserve the maximum freshness and flavours. The outcome? It’s an extraordinary mix of dark beer and cascara and coffee straight form the capital of Lower Silesia– WRCLW.

More about coffee at: https://sklep.etnocafe.pl/kawa-etno/822-yellow-bourbon.html