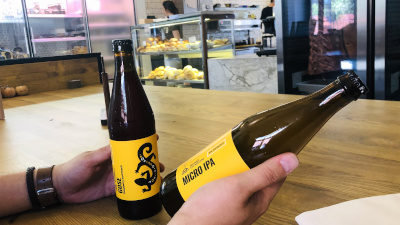 Two of our latest releases: SALAMANDER Micro IPA and SALAMANDER Raspberry and Peach Gose are going to make their debut at the 10th edition of Wrocławski Festiwal Dobrego Piwa held in Wrocław between 7 and 9 June 2019. Don’t miss the chance to visit our stand where we are going to host the well-known Belgian brewery: Delirium. Take part in the special event organized at the Beer Geek Madness Zone on Sunday from 3.00 to 5.00 p.m. where Magdalena Maj, our foodpairing specialist, and Michał Czekajło, our head chef, are going to run a foodpairing workshop titled “Foodpairing with Concept Stu Mostów.”

The Gose style has its roots in the German sour beer, Goslar. Traditionally, cilantro and salt have been used in brewing this style. The new wave brewing, however, has taken the recipe a step further and added fruit to the traditional foundations. The effect? Gose is a perfectly refreshing drink to sip in summer time. The beer is a perfect match for both long summer nights. It works well as an everyday beer. It’s recommended for enthusiasts of fruit beers. Barley and wheat malts have been used as the base while wheat flakes have been added to produce its velvety texture. Fruit tones come to the foreground in this style. Raspberry juice accounts for intense raspberry and stone fruit flavours while peach puree has released the complexity of fruit ethers produced by fruit and the fermentation process. Sweet fruit have been used to enhance the beer’s fullness.

SALAMANDER Micro IPA is one of the most recent beer styles and a variation of the IPA style. This time strong hopping so typical for DDH DIPA or New England IPA has been used along with a surprising low extract. The effect is a hoppy cracker that goes down very fast. This style has low alcohol contents and thus quenches your thirst. The meshing method and using oat flakes have produced a light but not watery beer. This is the lightest beer in our offer. The unusual part of the brewings process was not to add hops during the early boiling stages. Instead, we have moderately hopped the beer in Whirlpool to preserve more aromas and flavours. The Simcoa variety is famous for its resinous and pine tones. Once you open the tag, the air is filled with the wonderfully hoppy aroma.

This year, we are sharing a stand at the WFDP with our friends from Delirium. Don’t miss the chance to taste our new releases and some of the pink elephant label beers at the 10th edition of Wrocławski Festiwal Dobrego Piwa.

Visit our stand no 64 at the 10th edition of Wrocławski Festiwal Dobrego Piwa between 7 and 9 June and our pre-release event on 6 June at our pub on Długosza Street.