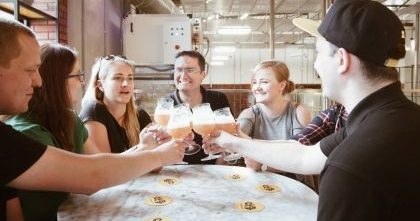 The name has it all!

Imperial – As the name suggests Imperial Hazy IPA must be a strong beer. “Imperial” always brings to mind high parameters. Our Imperial Hazy IPA is a perfect example. 19% extract proves that it is definitely a savoury beer. In spite of high initial extract, maltiness sets the background of the gigantic hoppiness. This is the reason why the grist consists of light malt only, the Pilsner malt, which allows the new-wave beers to show what they can do.

Hazy – Mashing in higher temperatures has retained haziness which also enhances the juiciness of this style.

IPA is by definition a style that needs to be filled with hops to the rim. Our brew is a perfect example! The hops are used to produce intense bitterness necessary to balance the beer’s powerful nature. To use as much hops as possible to produce aroma, we have used bitter hop extract that releases the necessary intense bitterness.

Huge amounts of hops have been used to produce the aroma:

Citra – a classic of the craft beer revolution with an extremely citrus aroma;

The beer makes its debut on 4 April in two places in Poland at the same time: the headquarters of Browar Stu Mostów on Długosza Street in Wrocław, and during the 10th edition of the Warsaw Beer Festival at the Stadium in Warsaw.

Salamander Imperial Hazy IPA will be served with a special dish cooked to celebrate the occasion: chicken hearts with chilli and cauliflower in stout sauce.