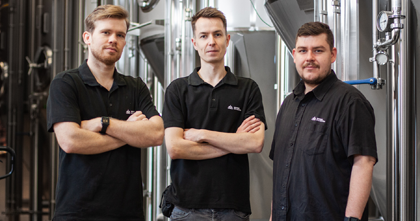 The first freeze-dried beer in the history of Browar Stu Mostów. This amber lager filled with caramel, toasted bread, and dry fruit tones has been enriched with 100% cherry juice. The aromas are intensified by freeze-dried water whose crystals have been extracted from precondensed beer. The freeze-dry process gives effects that are not possible to produce in classical brewing methods. Meet a traditional bock in a completely new version!

It’s yet another milestone in the technological history of Browar Stu Mostów. The freeze-dry technology has opened up the gates to a completely new world of freeze- dried beers. We couldn’t be more excited. Freeze-dry brewings has been quite a challenge that required investments and technological modifications. We’ve got it!

The effects have exceeded our expectations. We have kept traditional bock grist made of Munich malts that give the beer its full-body and sweetness. Caramel malts
enhance sweetness and bring to mind caramelized bread crust. They produce the ruby colour of the brew. The traditional continental malt variety, the German Magnum, has produced the required bitterness level and full-body to balance the sweetness of precondensed bock. Before freeze-drying , we added high quality juice pressed from sour and aromatic Polish cherries. This made it possible for us to freeze-dry both the beer and juice.

Freeze-dried brewings is a fascinating process. Since ethanol freezes in temperatures lower than water (-114°C to be precise, it is possible to freeze-dry water and extract crystals from precondensed beer. As a result, taste, aroma, and alcohol contents are more condensed.

Never before have we brewed such beer. Freeze-dry brewing is quite different from fermentation. It’s a completely new chapter in the history of our brewery. Cherry Eisbock is just the beginning of a series of historical brews! Join us to taste it!

On the tap in our pub. During the new release we are going to serve our collabs with Wylam – Life Beyond Metronom. Plus, an extra treat from Wylam Morello Cherry Porter – sweet porter aged in barrels used for storing the sour cherry Morello. It’s a must!

Why give it a try? First, bock is the lighter „cousin” of the Baltic Porter whose day we celebrated not so long ago. It’s a great Chance to compare those two beers. Second, freeze-dry brewings is quite a demanding process that does not result in huge amounts of produced beer. We don’t have a lot of bottles in stock. Third, it tastes phenomenal! Caramel but subdued fullness, cherry aroma, clear profile of bottom fermenting beer with sour, fruity tones are topped with well-balanced bitterness. It’s an excellent freeze-dried bock! Brewed in extremely low temperatures, the beer warms you up instantly!