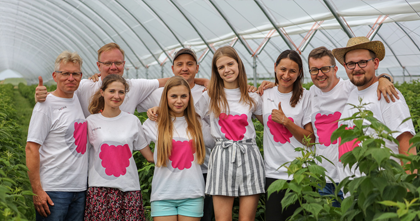 Weizenbock represents the darker style among wheat bocks. Its deep amber colour has been achieved thanks to dark caramel and chocolate malts. The core is made of wheat malts, which account for over 50% of the original grist. The produced sweetness has been balanced with sour raspberries, which intensify the beer’s refreshing qualities. In spite of its intense aroma, Weizenbock is a light beer often savoured in colder months.

Although Weizenbock is not known as a super hoppy style., it is customary to hop it slightly more intensely than other light wheat beers in order to balance its full body. What we use are traditional German hops: Magnum and Hersbrucker as their grassy and herbal profile matches the style perfectly.

Celebrate this exceptional release with the fruit growers from the raspberry region in Poland, who tasted the beer at the Berry Trends Conference in Kraśnik. Mateusz Gulej, the head brewer at Browar Stu Mostów has promoted the use of berries in craft brewing. We are happy to share our experience and bring the two sectors together again.

In 2016 there were over 1500 new beers brewed in Poland, 25% of which were beers with fruit such as cherries, raspberries and strawberries. They made an integral part of about 10% of fruity beers. A year later the number of new releases went up to 1655 whereas the share of fruity beers nearly doubled (to 48%). Raspberries are the most frequently used fruit among all berries. 5% of the new releases were brewed with the use of raspberries.

According to the most important report on the brewings industry prepared by Piwna Zwrotnica in 2018 “breweries tend to use fruit in the beer brewings process, specifically in brewings such styles as Milkshake IPA and our Ale. Similarly, to the previous year, the trend for brewings milkshakes has continued while sour beers have taken even more space at shelves.” Among last year’s sour beers raspberry was the most frequently used fruit with 10.3% share.

As a trend-setter, Browar Stu Mostów has been calling for quality improvement. The trend set by craft breweries for brewing with the use of berries may be soon adopted by regional breweries, which may abandon the use of fruit syrup to the benefit of fruit juice or pure. This trend goes along modern nutritional trends. We are going to share our experience in this field whenever possible.

We have been promoting berries. The trend for fruit beers has also led to the use of more exotic fruit such as tropical and citrus fruit as mango, oranges, or lemons. Joint forces pay off. The most determined and committed player is going to win.

The world premiere is taking place at the Berry Trend Conference in Kraśnik and Browar Stu Mostów – Wednesday 16/01. Beginning with Friday 17/01 the new release is going to be available in WRCLW, while beginning with Saturday in numerous pubs in Poland.

During the release weekend in WRCLW there will be a chance to taste WRCLW Raspberry Weizenbock served with beef tartare served with spicy blue cheese to balance the sweet brew. To enhance the fruity ingredient, the dish is coated with roasted raspberry demi-glace.

While planning your celebrations, it is worth remembering that with its maltiness and low levels of bitterness Weizenbock pairs well with game meat. In order to enhance raspberry flavours, the spice to use is rosemary.

Another bestseller brewed with the use of high-quality NFC raspberry juice is WRCLW Raspberry Rye RIS. Raspberry juice has enhanced the beer with sweet and sour flavours. Its raspberry flavours as well as chocolate and coffee core make the impression of eating a chocolate cake. The beer has been among our bestselling fruit beers.