The title of the Beer of the Year 2018
goes to Oatmeal Chocolate
Milk Stout NITRO! 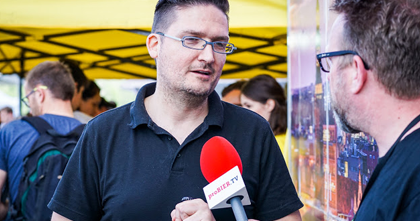 SALAMANDER Oatmeal Chocolate Milk Stout Nitro, our first nitrogen infused beer, has been awarded the title of the beer of the year 2018. It was released 10 months ago, specifically on 01/02. The debut was preceded with a year of hard work devoted to selecting the best technological solutions.

SALAMANDER Oatmeal Chocolate Milk Stout Nitro – this sweet and obsolete dark stout is often called “cream stout” for its domineering tones of chocolate, caramel, and coffee. Lactose gives the beer more body and sweetness whereas roasted barley introduces its distinct bitterness, except for its amazing colour, which along with hoppy bitterness balances the flavours. Since the beer is nitrogen infused, the beer has gained an amazingly creamy texture and beautiful head made of small bubbles.

Nitro Effect is something really special. Infusing beers with nitrogen rather than carbon dioxide results in higher drinkability and velvety texture. Its visual effects are exceptional as well. The cascade effect consists of beautiful, delicate, and velvety head made of small bubbles. The head lasts long. The beer tastes as if it was degassed. It’s an unbelievable experience to watch the beer being poured into a glass and take the first sip.

Here is the first Polish review at Małe Piwko Blog:

Nitrogen’s ability to dissolve in liquids is several times lower than that of carbon dioxide. What we have used at Browar Stu Mostów is advanced technological solutions that allow us to dissolve as much nitrogen as possible in beer. Right after opening and pouring the beer into a glass, nitrogen escapes as quickly as possible creating a cascade effect of a huge amount of tiny bubbles. After a while, nitrogen moves up whisking protein dissolved in beer. As a result of this process creamy and long-lasting beer head of tiny bubbles is produced, which is not available in carbonated beers.

To fully enjoy the nitro beer, serve it right. Cool the bottle down to &lt;7 ⁰C; don’t shake it. Open the bottle quickly and pour the beer into a glass holding the bottle vertically. Now you can enjoy the cascade effect, which produces a beautiful beer head of tiny bubbles. Don’t miss the chance to taste the latest releases under the NITRO series!

11/12 join us to celebrate the special birthday release of WRCLW Imperial Stout NITRO Bourbon B.A. 2018. This is the first in Poland nitrogen infused Imperial Stout aged in oakwood barrel. On 13/12 the beer makes its debut in the best pubs. More details at https://www.facebook.com/events/262339011108665

A picture made by Patryk Piechocki during the Wrocław Good Beer Festival. Grzegorz Ziemian
is giving an interview to proBIER.TV. For complete coverage go to
https://www.piwnybrodacz.pl/2017/06/cmokanie-czas-zaczac-wfdp-2017.html