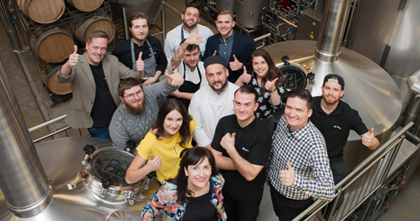 Celebrate our 4th birthday with us!

The 4th Birthday of the Brewery will open up the possibility to spread knowledge about the dynamically developing market of good quality beer. As representatives of the craft sector we are creating tastes. As the Brewery we are brewing at full power starting with Pils, the craft’s flagship, to the birthday brew: Imperial Stout NITRO Bourbon B.A. 2018 – the first in Poland nitrogen infused Imperial Stout aged in oak wood barrels. It’s a great opportunity to get to know WRCLW, a city that loves good quality beer and promotes craft on a daily basis.

To celebrate the Brewery’s birthday, we would like to invite you to join our new release of WRCLW Imperial Stout NITRO Bourbon B.A. 2018. More details available at https://www.facebook.com/events/262339011108665 the release is
scheduled to take place on Tuesday 11/12, on the day of the Brewery’s birthday. This day we are going to have a cake and candles. More details at our Facebook profile – https://www.facebook.com/events/356278234931788/ On Wednesday 12/12 join our workshop on dark beers, ageing a nitrogen infusion (details below). On 15- 16/12 we are going to share more about our experiences and innovations during the exceptional birthday tap takeover in Belgium at Black Beer Fest 2018.

WRCLW Imperial Stout NITRO Bourbon B.A. 2018. Our birthday brew looks fantastic. The cascade effect produced by NITRO is going to be amazing. This style is very thick and for this reason the cascade effect takes place as if in a slow motion. Thanks to the beer’s thickness and viscosity bubbles are produced and go up much more slowly. Watch the video to see the effect produced by our innovative method: www.facebook.com/BrowarStuMostow/videos/1403921369736904

Imperial Stout is the strongest and thickest beer in the offer of Browar Stu Mostów. Brewed with loads of dark and roasted malts, this beer is filled with chocolate, coffee and caramel aromas. With time, it releases the tones of dark dry fruit and pumpernickel. This intense beer has been enriched with aromas of vanilla, coconut, spices and American whiskey during it ageing process in the barrels that stored Bourbon Woodford Reserve. On top off that, the beer has been nitrogen infused. It has gained a beautiful and unique texture. It is unbelievably intense and savoury. The exceptional release is scheduled for 11/12 on the day of the fourth birthday of the brewery. Join us for an unforgettable toast and the first sip of WRCLW Imperial Stout NITRO Bourbon B.A. 2018!

Beers served during the birthday week. The best brews on taps beginning with Tuesday. We are giving away presents (by rotation, randomly).

WRLCW Rye RIS – mind out: the second tank! It’s a classic with rye malts and prune
aromas that are produced during the ageing process. Taste it with our birthday
specials.

Craft education– tasting workshops. We are going to start with a tour around the brewery to introduce our participants into the process of beer brewing. Next, we are going to move to a club room and offer you tastings of our birthday brew WRCLW Imperial Stout NITRO Bourbon B.A. 2018. We are going to talk to you about dark beers, nitrogen infused beers, and barrel aged beers. We have invited the Cocktail Bar by Incognito to join our discussion on bourbon, its origins, raw materials used in production and the ageing process itself. We are going to teach you how to taste whiskey and have a sample of a truly exceptional representative of this spirit. The hosts are Kasia Chlebus and Sebastian Kruk-Florkowski. After the workshops , we are going to hit the pub. Join us on 12/12 at 5:00p.m. Reserve your spot at Evenea https://evenea.pl/imprezy/kultura-i-sztuka/wroclaw/degustacja-z-incognito209850