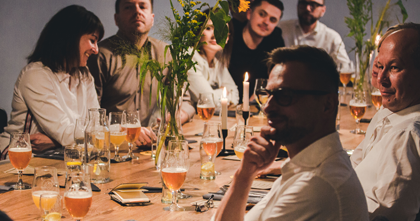 A real feast for taste buds!

We have brewed the first light and aromatic version of this beer style in cooperation with the Spanish Laugar (ART#19 Brut IPA). Since we enjoyed the brew so much, we have decided to create a more “classic version” of this style that was born only in 2018.

Brut IPA has closed the gap between the New England IPA and West Coast IPA. As a very light beer, its grist consists of light malts only. Wheat flakes and malts produce subtle haziness and light colour of the beer. Mind out! This refined beer is highly drinkable and very strong! Visit us to taste it!

Foodpairing. As Brut IPA is a very light beer, dishes served with it must be delicate with the first choice being poultry. Another base for accompanying dishes include fresh water fish and root vegetables. Brut IPA is moderately hopped to produce bitterness which is more distinct in refined beers. To enhance the bitterness, it is recommended to use spicy side dishes such as spicy peppers. Whereas to balance the bitterness it is worth using some oil. The beer’s aroma has been mostly released by citrus and white fruit. To enhance their flavours, it is a good idea to use sour ingredients or fresh herbs e.g. cilantro or lemon grass.

On Długosza Street. This weekend’s special is beef tongues terrine / horseradish mousse / walnut pesto. Our version of this speciality of the French cuisine is going to be prepared with beef tongues. This delicate meat goes perfectly well with refined style. As extra ingredients we have decided to use horseradish mousse whose spicy tones are going to enhance the light grist and bitterness of this style. We suggest you try Jopen Jacobus Rye Pale Ale and check how the dish flavours change their profiles when consumed with rye beer. It’s worth giving it a go!

Jopen Jacobus Rye Pale Ale on the taps – American Pale Ale. Rye is the favourite ingredient of both Jopen brewery and Browar Stu Mostów. Thanks to rye malts and American hops, the beer gains fuller body, clearness and spiciness. This original recipe pairs well with beef tongues and enhances their distinct flavours.

Brewski Herr Hemlig 2.0 – American IPA has always been one of the favourites to accompany meat dishes. This is a distinct, hoppy, and intensely malty East Coast IPA with a modified recipe. This IPA goes back to the times before Brewski started adding fruit by loads. A classic with a twist. This beer enhances beef tongues flavours. It’s worth comparing the dish consumed with mega Brut IPA and East Coast IPA.