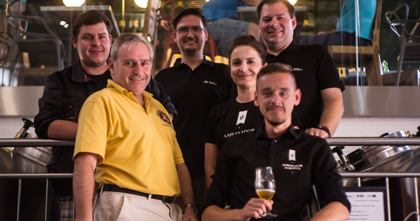 The wheat symbol of Wrocław, a historic beer style with a unique sweet overtone balanced with a sourish finish produced by wort acidified with lactic acid bacteria. On top off that, the beer aged in porto barrels. The aromas of toasted bread and nutmeg have been enriched with beechwood smoked prunes.

We have brought together traditional and new wave brewing. After being reintroduced to the offer of Wrocław-based pubs following several centuries long absence, Schöps aged in porto barrels with beech-wood smoked prunes. This way the sweet-and-sour profile of the beer has been enriched with exceptionally unique aromas of prunes, bonfire smoke, cold smoked ham, forest fruit (blackberries and cherries), oak wood and porto wine. It’s history rediscovered.

Brewed since 16th century, Schöps was considered as one of the leading beers of Europe of that time. This beer style along with its original recipe disappeared for the next two centuries. We have recreated this style together with an international team based on descriptions of its taste found in historical records and expertise on historical brewing in the region of Lower Silesia. This moderately hopped beer was well-known for its unique honey-and-nutmeg aroma and distinct sweetness balanced with acidity produced by lactic acid bacteria living in the oak wood barrels where the beer fermented and aged. In our version, Schöps also aged in barrels, specifically porto barrels, that have produced unique flavours and aromas.

The beer’s nutmeg sweetness has been produced by loads of wheat malts, both light and dark, that bring us closer to the original flavours. Extra ingredients such as barley malts: caramel and melanoid, produce full-bodied and intense aromas. We have used a total of 6 malt types to produce such an unusual flavour and aroma.

The traditional decoction mashing process based on separating part of the mash and bringing it to a boil highlights the malty character of this beer style. Since Schöps was considered to be a stronger beer, we have raised the extract to 14.5% but kept it lower than the extract of German bock biers. Alcohol content is quite low thanks to top-fermenting yeast strains with a low degree of defermentation. As a result, the beer keeps its full-bodied (malty) aroma.

Foodpairing. As a rule, wheat beers are light-bodied and go well with flour-based dishes, fish or poultry. The ageing process has opened up a wide range of possibilities for foodpairing! The rediscovered Schöps has been enriched with multiple aromas that may be divided into two groups: one produced by barrels and the other one by smoked prunes.

Oak-wood porto barrels produce subtle astringency that bring to mind forest fruit aromas. That’s the reason why it goes well with sourish snacks. Wood also releases vanilla flavours. As for spices, smoking process releases such spicy aromas as all spice and cloves. That means it is worth enhancing these aromas by adding spices to dishes. Other ingredients that complement smoke include mushroom and long maturing meats. For this reason, pork may be used as well.

Specialties on the taps. Jopen Hoppenbier – golden beer which is a perfect reproduction of the Haarlem beer and brewed in accordance with the brewery’s guidelines from 1501. An absolute classic! Smooth and refreshing aromas filled with fruity and spicy tones of laurel leaves. A pleasant, long-lasting bitterness. An excellent beer that pairs well with a classic dish served with unusual ingredients. Another attraction is WRCLW Barley Wine! We are going to serve the first tank of barley wine. The beer will enhance the dish with its extract and complexity.

Porto-barrels aged beers. Ageing beers in barrels is an incredible experience. First of all, the beer undergoes an oxidization process. The flavour and aromas balance while porto, sherry, and dry fruit (plums, raisins, cherries) and honey are released. Tannins are released from wood to balance the sweetness of Schöps with their astringency. Caramels and other compounds from smoked wood account for subtle vanilla and spicy flavours.

Ageing with smoked prunes. To paraphrase the saying it’s a real prune on the cake! This ingredient brings unique and intense flavours. Who know it may bring the profile of Schöps to some historical interpretations of this style. Historical malts might have been smoked more or less depending on the simple method of drying wet malt sprouts on special wood smoked grates. It was common for the smoke to mix with malts and consequently produce smoked flavours.

We believe that the aroma of freshly cold-smoked prunes over beech wood goes best with this beer style. Smoked prunes, bonfire smoke, ashes, and smoked ham enhance the rich palette of flavours. Schöps is a historical beer with a new wave touch. It’s history rediscovered!