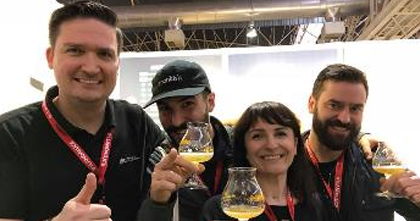 In order to recreate the atmosphere of the 6th edition of BGM, we are going to serve one of the festival’s dishes on Długosza Street. Namely, beef ribs that were the bestselling dish during our April collaboration with Malte. This dish is going to go really well with the new release of Salamander Citrus DDH DIPA. We have added new sides. Mango salsa is going to enrich the citrus and tropical character of hops added during the ageing process whereas cardamom goes perfectly well with the Spanish dry tropical fruit. We are also going to add chilli peppers to highlight the style’s bitterness. We suggest you try the dish with Laugar Amarauna Hazy IPA, brewed in cooperation with our friends from Bilbao. Aromas of mango, peach, and orange together with pine flavours enrich the fruity tones of the dish.

To top it off, we are serving the explosive mixture of the Spanish craft. Rotating on the taps (randomly):

There will be a selection of bottled Spanish beers. The marked beers will be available in the Pub to celebrate the new release.

Double Dry Hopped DIPA is the fashionably current style. This is quite an innovative take on the DIPA style. It is slightly sweater, less strong, with intense hoppy aroma and balanced bitterness. The haziness of the beer brings to mind fruit juices. It is recommended to drink it superfresh; that’s when it tastes amazing. Aged with citrus fruit: lemons, oranges and grapefruit.

Although this is not one of the stronger IPA beers, alcohol contents are quite high. The beer is more full-bodied. Alcohol contents oscillate around the lower levels as for the DIPA style. The beer needs a smooth texture and slight haziness, both of which have been produced by wheat malts and oat flakes. Hops have been added at all brewing stages, loads of them.

What we have added to this already aromatic beer is a real explosive mix of dry citrus fruit produced by means of a unique Spanish technology. We have not added fruit peel but whole dwarf varieties of fruit that are first dried and then ground immediately. This accounts for their intense flavour and aroma of whole, juicy fruit. We have extracted citrus fruit using HopGun to produce ether oils, next we have separated them from the beer to prevent too much bitterness. The effect is electrifying! Such an intense citrus aroma and taste. Join us to taste it!