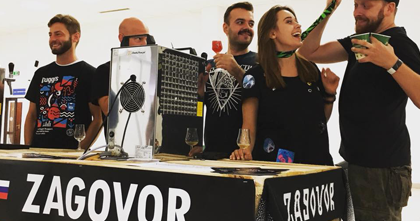 Zagovor, a leading brewery on the alterative scene in Russia, awarded the title of the Best Brewer in Russia by Ratebeer Best (2015). Its name, which translates as conspiracy in Polish, captures the atmosphere in which craft is developing in the east. As a pioneer of the New England IPA style on the craft market, Zagovor is an expansive brewery with a large number of collaborations with breweries from Germany, Italy, Serbia, Latvia (the most recent collaboration) and the USA (3 collaborations). Their partners include: De Molen, Garage and BRLO. Visit us on Monday 24/10 to take part in collaborative brewing. Don’t miss the chance to get to know the Zagovor brewery.

On Długosza Street we are planning to brew ART#21 Pineapple and Passion fruit Sour Ale, not too savoury but rather full-bodied balanced with a malty touch. We are going to use the wort souring method known as “the kettle souring”. What is more, the fruit we are using (Passion fruit) is going to enhance and balance the beer’s sour profile. It is going to be a really fruity, full-bodied and sour beer. A perfect match for the fall season.

17 October. We are in for a sour Wednesday on Długosza Street. With the fall season come the higher extract brews. On Wednesday we are going to taste a lot of them to prepare for the release of ART#21. Join us today. More details in the event.

25-28 October ART#21 is released on Długosza Street, in WRCLW and partner pubs all over Poland. More details regarding our release in Russia / Moscow coming up in October.