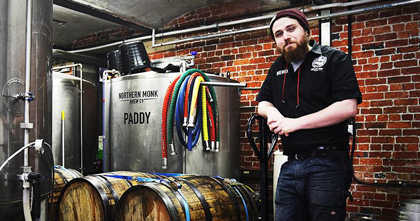 We are brewing on Długosza Street in collaboration with the fastest developing and the most exciting breweries in Great Britain. We have recently brewed in Leeds. On Thursday 20/09 we are having the collaborative brew and Meet The Brewer & Tap Takeovers. Today, the big release of ART#22 DDH DIPL.

The collaborative brew of DIPL, or double india pale lager, begins on Thursday morning. This double cold-hopping has been used to enhance the fruity aroma. Our aim was to create a unique and highly drinkable beer. We have chosen lager as it is the most popular style in our part of Europe and we have enhanced its recipe with a new-wave twist. This is what Northern Monk is well-known for. Lunch with our guests at 2:00p.m.

Meet The Brewer & Tap Takeovers starts at 7:00 p.m. in our pub. We are hosting Adam Lyle, Lead Brewer, and Vas Venizelacou, Sales Operations, in charge of the export and distribution success of Northern Monk. We are going to discuss and ask about the latest trends in craft brewing and the huge success of Northern Monk, which already has 2 breweries and keeps developing. The list of their collaborations is impressive and includes top English craft breweries and such world icons as Other Half, Finback, or De Molen. It’s the second collaborative brewing between our breweries. In Leeds we brewed Mocca Baltic Porter. Don’t miss the chance to talk about both collaborations.

Bring your questions. Here is a video which touches the topics of creativity, distribution, barrels and crowdfunding which the brewery needed to address to achieve the position of one of the leaders in craft brewing: https://youtu.be/wXjdpTQIogM?t=1m52s On the taps: hazy IPA and DIPA, the styles the British are famous for.

The release of ART#22 DDH DIPL has been planned for the weekend of 8-11 November.