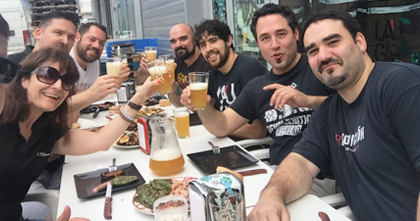 We have been keeping you updated but let’s recap our trip to Spain. We have brewed with three breweries meeting, exchanging experiences and enjoying the atmosphere of the big craft family. It’s all about craft brewing. Commercial production has seen none of it. We have focused on promoting Polish craft breweries, WRCLW and the Polish-Spanish Beer Bridge. What an incredible experience!

We have set off in the Western coast of Galicia, which differs so much from the rest of Spain. Our beers are already well known among the locals. We have got to know the Galician cuisine which makes an integral part of this regions culture and identity. Craft beers have been gaining in popularity as a day-long drink (as beer is definitely a lighter drink than wine). We have used the time to meet local distributors. It’s been
the second time this year that we have taken over the iconic O Bandullo Do Lambón pub. This time Browar Stu Mostów has taken over the taps along with Dois Corvos and Laugar Brewery.

From “the land of the thousand rivers” as Galicia is known, we have travelled to the Basque Country, where we have brewed collaboratively with the Laugar brewery. The outcome: Coffee Sour. In Pamplona, we have brewed the Baltic Porter with Naparbier. Some of it is going to age in barrels. The third famous Spanish brewery we have cooperated with brewing Belgian IPA was La Pirata. The big finale took place at the La Fira Festival in Barcelona on 6/7 July. As the biggest and most important beer expo in Barcelona, La Fira del Poblenou consists of three days filled with meetings, shows and beer tastings.

Find out more about the Beer Bridges at https://100mostow.pl/en/beer-bridges

While in Spain, we have established cooperation with the Wylam brewery, which we are going to brew with in England soon. The world is small. Follow our coverage from London Craft Beer Festival 2018. Stay tuned at Browar Stu Mostów in England –https://www.facebook.com/events/987947304696714