Double release of ART#18
Brewed in WRCLW cooperation with DeMolen! 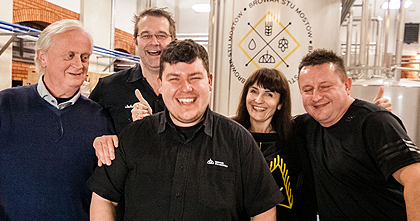 Brewed in cooperation with one of the most prestigious craft breweries in the world, DeMolen, ART#18 is our take on the style of Wheat Wine. The strong, intense, and yeasty character of the Wheat Wine is balanced with lighter colour and subtle malty tones contrary to Barley Wine or RIS. We couldn’t have chosen a different beer style as John Brus, the founder and main brewer at DeMolen who has visited our brewery in WRCLW is well known for creating excellent, strong beers! We wanted it to be special so we have decided to try something new. That’s how we brewed Wheat Wine. Such a strong but well-balanced brew is ideal to show subtle ingredients.

We have decided to produce two separate tanks. We are offering two versions: one with Polish acacia honey and Mexican vanilla sticks and the other one with more distinct canola honey and freshly roasted coconut chips added just before HopGun. Visit us to try: Honey and Coconut Wheat Wine andHoney and Vanilla Wheat Wine. Fullness/maltiness: 10/10, alcohol 10%!

Culinary treats to go with the release

To pair each of the Art#18 versions, we are offering different dishes. What goes best with subtle canola honey and coconut chips is roasted fish served with candied strawberries and mango pearl barley. Distinct tropical flavours of the classic fish go well with yeasty aromas of a wheat beer. The more intense aroma of acacia honey and Mexican vanilla sticks is paired with a more distinct dish: goat meat with crab noodle and kohlrabi juice.

More about the beer style

The Wheat Wine is our variation on the Barley Wine style having its origins in England. The first commercial beer of this style was brewed in the second half of the 19th century although some argue that barley beer had been brewed as early as in Ancient Greece. We have taken a fresh perspective on this style. In contrast to barley wine, wheat wine differs in colour. It is much lighter and thus less intense in terms of malty aromas. As a result, the beer is subtler and the bouquet is dominated mostly by yeast tones and extra ingredients. The common ground is high alcohol contents, sweetness and moderate bitterness level.

27% extract by weight. Achieving such a high extract with the use of wheat malts is quite an achievement. Using mostly light malts produces uniquely light colour of the brew. This is the reason for subdued malty tones. We have used traditional, continental hops, Magnum to produce bitterness, and Hersbrucker, to produce flowery aromas that go well with strong, light beer. Whereas Wheat Wine leans more towards the malty side. That’s why, hopping is less intense.

At the last stage of the production, the beer has been mixed with craft honey. The Honey and Coconut version contains canola honey, the first spring honey produced by bees after wintertime in the months of April and May when rape plants are in full bloom. The smell is long lasting and may last for few years while its subtle, mellow taste brings a clear touch of bitterness. After adding honey, the beer has been pasteurized to preserve its qualities. Roasted coconut chips were added just before going through the HopGun to bring about the aromas of coconut copra just before bottling.

The Honey and Vanilla version has been mixed with exceptionally light and aromatic acacia honey. Produced during the blooming season of Black Locust trees, the acacia honey is filled with flowery aromas. After adding honey, the beer has been pasteurized to preserve its qualities. Mexican vanilla sticks were added at the very end of the HopGun process to enrich the beer with this refined spice.