Visit us at the 9th edition
of Wrocław Good Beer Festival! 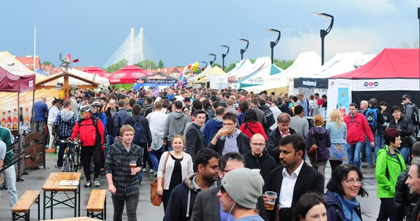 This is where everything started. Similarly to other breweries, we also made our debut at the Festival. The WGBF is the icon among all craft beer festivals. As the oldest and the biggest in Poland, WGBF is one of the most important craft events in the world. The 9 th edition is going to have it all: the ambience, magic, nostalgia, pride, ambitions. Visit WRCLW where we offer good beer to thousands and thousands of people. Craft brewing is no longer niche market. It is hope for everybody to drink good quality beer. Cheers!

On the taps our SALAMANDER Oatmeal Chocolate Milk Stout NITRO which has been well reviewed by many. As the only nitrogen infused beer, it’s a milestone and revolution that everyone should have a chance to taste. You can’t miss the opportunity at the festival!

For the three days of the festival we are going to serve Nitro Stout and WRCLW Pils – the beer everybody you bring along should try to appreciate the lighter shade of craft brewing. This is the beer that has been appreciated since the very beginning. Last week it was awarded by the Good Beer Academy. Read more about its success at – Brewery wins three awards at the Good Beer Academy https://100mostow.pl/blog/2018/05/30/akademia-dobrego-piwa. Also, we are going to have on taps Salamander AIPA or Salamander Pale Ale – they will take turns.

We are going to start on Friday with ART#8 Strawberry Berliner Weisse, already a legendary brew awarded by the Good Beer Academy. We can’t promise it is going to last till Sunday. No matter how much we offer, it always sells out in any festival we go to. Our export bestsellers are going to take over taps: SALAMANDER Strawberry Milkshake IPA and SALAMANDER Black IPA. We’ll take you back to our early days with WRCLW Roggenbier, WRCLW Hefeweizen, long-time favourite among chefs and restaurateurs; and of course WRCLW Schöps. The main attraction is, ART#14 Mango ; Peach DIPA, brewed in cooperation with Brewski, one of the most prestigious European breweries.

The festival programme at http://www.festiwaldobregopiwa.pl/program/

More information about our Festival offer in the special event “Browar Stu Mostów at 9.WFDP” –https://www.facebook.com/events/170815120281169