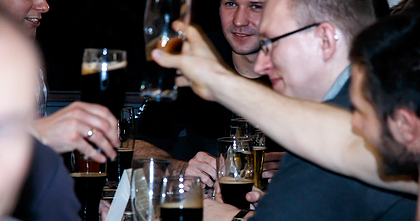 As the “Imperial” part of its name suggests, this is one of the strongest beers high in extract. Although it is brewed in many versions, it is the extreme version of this style high in extract that makes the hearts of any beer lovers beat faster. It is not an ordinary beer! It is a great event to have such a powerful beer to be brewed. Join us to taste WRCLW Imperial Stout!

To celebrate this occasion, we are serving a special dish and dessert. The intense flavour of fried seasoned beef in cinnamon sauce will balance our latest release: WRCLW Imperial Stout. On our taps another beer of a similar style by the Evil Twin brewery – Even More Brunkager [more info below] with cinnamon, cardamom and spicy cookies. Polished Black Gold – the Baltic porter brewed in cooperation with Jopen – is going to bring out roasted tones of the dish. The slightly bitter Salamander AIPA is going to balance the dish and ensure a complex finish.

As dessert, brownie with bacon and whipped cream which pairs well with Salamander Oatmeal Chocolate Milk Stout NITRO. When paired with WRCLW Barley Wine we are going to enjoy balanced flavours and be sure that the sweet dessert is not going to be too heavy. The menu is available from Thursday 4 p.m. to Sunday, closing time.

As the “Imperial” part of its name suggests, this is one of the strongest beers high in extract. Although it is brewed in many versions, it is the extreme version of this style high in extract that makes the hearts of any beer lovers beat faster. It is not an ordinary beer! It is a great event to have such a powerful beer to be brewed. Najmocniejsze i najgęstsze piwo Browaru Stu Mostów. Czarne, nieprzejrzyste, warzone z największą ilością ciemnych i palonych słodów. Wypełnione po brzegi aromatami czekoladowymi, kawowymi, karmelowymi. Niesamowicie esencjonalne i wybitnie degustacyjne. Wspaniała wizytówka marki. Więcej o marce WRCLW na https://100mostow.pl/marka-wrclw

Extract 30.0 % weight., alcohol circa 11.0% vol. It’s quite a challenge to produce such high extract. Taking into consideration thickness of the wort (30% extract) the efficiency of the production process slows down. Both the abilities of brewers and capacities of the equipment are tested. It’s nothing but extreme: the total amount of malts, the mix of dark and caramel malts and roasted and colouring malts, which bring about intense coffee, caramel, and freshly roasted cocoa beans. The wort itself tastes like sweet chocolate-coated brownie. It’s an amazing process to observe.

Traditional, continental hops have been used to produce required bitterness level (Magnum) and to release herbal aromas (Tettnanger) which with time wonderfully oxidize in dark strong beers. Imperial Stout shifts a bit towards the malty side and this is the reason for low intensity hopping.

Such trick and fully bodied beers age well, similarly to good quality wines. It is a great idea to store several bottles and open them at regular intervals (e.g. every half a year). Every time you open a bottle, the beer is going to taste a bit differently. At first, it is going to be chocolate and dessert-like. With time, it is going to taste like porto, sherry, or dry fruit (prunes, raisins and cherries). It’s well worth trying.

If stored in proper conditions (about 10C, no sunlight), the beer is going to release fine tone produced by oxidation process.

To learn more about the beer, go to: https://100mostow.pl/en/wrclw-imperial-stout/

To find out more, taste, buy, go to https://100mostow.pl/piwna-mapa

EVIL TWIN Even More Brunkager
Imperial stout brewed with cinnamon, cardamom, and Brunkager Cookies, traditional Dannish spicy cookies. With full body and velvety texture, this is a strongly roasted beer which releases tones of marzipan, gingerbread and cinnamon. The flavours of
all added ingredients are brought out by the fine roasted coffee finish. This is a perfect beer to match our release dessert.