18 taps at Dudes
in Copenhagen & Beer
Bridge with Denmark! 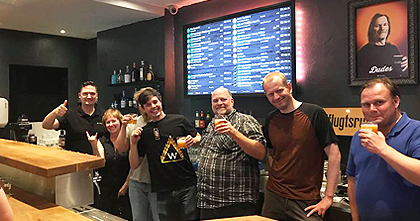 We have presented all our brands: SALAMANDER Oatmeal Chocolate Milk Stout NITRO – the first nitrogen-infused beer in Poland has made a big hit with the locals, just as SALAMANDER Strawberry Milkshake IPA – one of our bestselling export beers; ART#17 Pink Guava Sour Saison – recently brewed in cooperation with the best Spanish brewery Naparbier; WRCLW Rye RIS Porto &amp; Bourbon BA as well as the recently released Imperial Stout.

Our beers have gained in popularity thanks to a good distribution and cooperation with Brewski. It is not far at all to Helsingborg in Sweden. More about the Scandinavian Beer Bridge at https://100mostow.pl/piwnemosty