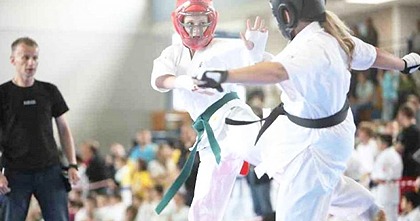 We are proud to sponsor European Kyokushin Karate Championship

We are in for a real feast of Kyokushin enthusiasts. Several hundred professional players, thousands of fans, and two days of competitions. The Lower Silesia region is going to host the prestigious Kyokushin Karate European Championship.

The best senior players are going to compete on 11 May in Wrocław, and junior players in Kobierzyce the next day. Poland is going to be represented by Sandra, Ania and multiple European Championship medalist Agata Winiarska. We couldn’t be prouder and more excited to sponsor such an event.

To celebrate the occasion we are going to organize Japanese weekend and Japanese menu in cooperation with Sushi Corner. We are going to host many martial arts enthusiasts and players. Japanese officials are going to be served a special dinner. More information at https://www.facebook.com/events/201915123930021/

The refreshing, lighter version of saison, SALAMANDER Raspberry and Basil Rye Grisette, is going to be released this weekend. More info at FB event– https://www.facebook.com/events/1792129044209073