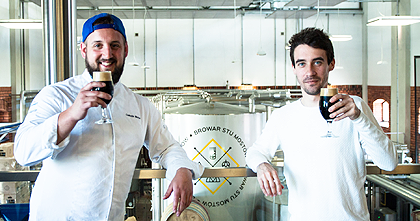 We are in for promotion of craft, aged alcohols and culinary talents. Two teams have joined forces: Browar Stu Mostów LED by Michał Czekajło and Portuguese Taszka with it chef Nuno Matos. The effect of cooperation will be served in the Brewery and Taszka over the weekend.

Thursday 3 May 7:00 p.m.– release of WRCLW Rye RIS Porto and Bourbon Double B.A. 2017. Our guests include Kalina Pietrzak and Nuno Matos from Taszka. Kalina is going to talk us through barrel aromas in wines, specifically Porto. It’s a unique chance to exchange knowledge and experiences regarding varieties of barrels: European, American, oak-wood, chestnut, and acacia. Nuno Matos is going to talk about Portuguese cuisine and present jointly prepared dishes. We are going to see a short video about Portugal and wine. Each beer is going to be served with Portuguese beer snack Bacalao.

Friday 4 May, 6:00 p.m.– release in Taszka restaurant. We are going to talk about our latest release and barrel-aged beers. Guests will be treated to comparison tastings of Rye RIS Porto and Bourbon Double B.A. and Porto.

Saturday 5 May, 2:00 p.m. – join us for a special tour of the Brewery. We are going to talk about Porto barrel-aged beers that ensure refined wine oxidization and maturing. Kalina Pietrzak from Taszka is going to talk about refined spirits and the use of barrels. Another attraction is Porto tasting.

The process of ageing beer in barrels is an incredible experience. First, during beer oxidization process, flavour and aroma balance, porto, sherry and dried fruit flavours (prunes, raisins, cherries) come to light. Alcohol tones slightly fade away. Finally, as the beer matures in the barrel, which is not a tight container, water evaporates more quickly than other ingredients. This effect is known as the “angel’s share.”

Barrel-aged beers absorb the qualities of the alcohol previously stored in the barrels. Tawny Porto accounts for the beer’s slight acidity, deep aroma of red fruit: blackberries, cherries and raspberries, as well as spices such as cinnamon and cloves.  Bourbon barrels produce intense vanilla aromas enriched with coconut and spice overtones.

Barrels used to be one of the most popular tight, unbreakable containers that could have been rolled from one place to the other, which made a difference in the times of no cranes or forklifts. Today they are appreciated for the unique impact that oak wood has on the structure and nature of the aged spirit.

Taking everything into consideration, the complexities and multiple layers of WRCLW Rye RIS Porto and Bourbon Double B.A. 2017 can be savoured in various temperatures. We recommend serving it in a slightly lower temperature of about 10°C and warming it up in your palms up to about 18°C.