Visit WRCLW: the Beer Capital
of Poland and Spain 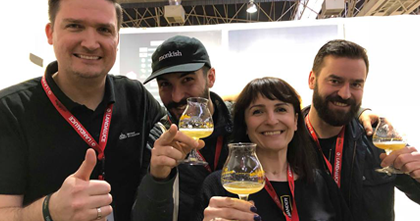 Visit WRCLW to celebrate the grand feast of craft brewing!

The Beer Geek Madness, the biggest and most important beer even in Poland, is bringing together the key players from the Spanish and Polish craft industry. Every year the festival attracts craft enthusiasts from all over the world. The guests of the BGM6 “INTENSE” include Laugar Brewery, Garage Beer Co, Cerveses La Pirata, La Quince Brewery, In Peccatum Craft Beer, Edge Brewing and Naparbier. This year’s edition is likely to break many records already set by this event. The most important thing, however, is the fact that outstanding brewers and craft beer enthusiasts are going to be our guests. They are all our friends. We are expecting a real mix of beer lovers! Visit WRCLW to experience the essence of the Spanish vibe, the Southern connectivity, friendliness and joy. The fact is that we have never had more fun than at BGM, not even in Barcelona. No idea how the celebration is going to end up! We definitely know where it is going to start.

Join us to see how the collaboration is going to work out. Our team: Mateusz, Michał, Filip, Beinat Gutierrez, the main brewer at NaparBCN, the holder of the RateBeer Best New Brewer title and Juan Rodriguez, Top Brewer, Naparbier, are going to work all day. At night we are organizing Meet the Brewers at Szynkarnia. Our guests are at your disposal. More details at www.facebook.com/events/188091205301936.

It’s the first culinary collaboration in the history of the brewery. The Partner of Browar Stu Mostów is MALTE, from Galicia, which has built its position in Spain on the idea of pairing beer and food. #Menúdeldíamaltero is famous for the use of local products and international recipes which include beer as an important ingredient. What matters for them is, first of all, flavour, and the Galician products. We never miss the fun part. They are going to prepare six dishes for our Friday tap takeover: seafood, fish, cheeses, veggies, and fruit. A special delivery is on its way to WRCLW. They are going to serve home-made bread and dessert. The outcomes of our culinary collaboration is going to be served to the BGM guests on Saturday. We are going to prepare a Galician-Polish menu.

Saturday 7/04. Even more guests in the house

We are opening the pub at noon. About 2pm. we are expecting the BGM guests from Spain. We are going to give tours with the last one at 6 p.m. Then, some of us are going to visit Zaklęte Rewiry to celebrate the release of SALAMANDER Grapefruit and Mandarin DDH DIPA. Another beer served is going to be SALAMANDER Oatmeal Chocolate Milk Stout Nitro. Visit the Polish-Galician stand of Concept in collaboration with MALTE.

The festival continues on Sunday 8/04. We are opening the pub at 12:00 SALAMANDER Grapefruit and Mandarin DDH DIPA – Double Dry Hopped DIPA on the taps. Double hopped IPA with the use of Hop Gun to achieve outstanding aroma. The citrus flavour has been boosted with the maximum amount of grapefruit and mandarin orange zest added together with freshly squeezed juice. It’s a real citrus bomb! Take the first sip!

All enthusiasts of craft brewing and Spanish cuisine are cordially invited. Join us to debunk the myths of Spaniards seen as tempestuous and edgy heart-breakers or machos. We’re challenging stereotypes. Let’s have fun and see how much we’ve got in common. Join us at https://www.facebook.com/events/2122175208012745/