ART#16: the official beer
of the world’s biggest Blueberry Conference 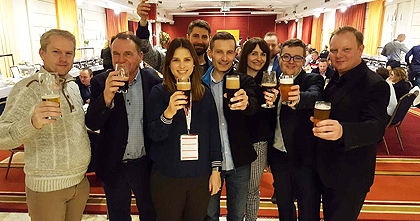 ART#16 has become the official beer of the 6 th edition of the Blueberry Conference, the biggest meeting of blueberry growers in the world. The official premiere will take place at a gala dinner closing the first day of the Conference. Another attraction is going to be Blueberry Berliner Weisse which made its debut in Berlin two weeks ago. We are also going to serve SALAMANDER Pale Ale, a classic craft brewed from American hops . The Polish Berry Cooperative is going to introduce ART#16 as the grand finale. Michał is going to introduce each of the beers. Our joint objective is to promote blueberries, berries, craft values and creative thinking that have led to the success of Poles. Our partners, Polish Berry Cooperative and the Conference organizers, actively promote unconventional cooperation such as collaborating among groups of producers, first of its kind in Poland.

Berliner Weisse has been brewed with the variety of Chandler-type blueberries gathered at the Polish Berry Cooperative farms. This low-alcohol contents beer has had interesting origins that go back to Berlin. This sour, light wheat beer is known as aperitif in the world of beer. It is in a wonderful drink for summer as well as winter nights that could easily replace a glass f champagne. It is brewed with an addition of fruit which wonderfully enrich this style. Brewing with the addition of fruit is one of the latest trends in the craft brewing. We want to introduce a variety of beer styles by using the highest quality fruit including its peels and seeds as 100% puree. No preservatives added. Commercial brewers steer clear of this brewing process due to related costs and technological challenges. We have taken up the challenge to show what fruit beers should taste like: no artificial additives, no sweeteners, no colorants, no artificial aromas. Berliner Weisse has become our trademark. We have crowned our experiences with the use of blueberry which has produced a beautiful light blue colour, subtle sweet aroma and has brought some acidity to this style. It’s a truly delicious and refreshing aperitif! Feel invited!

Another beer offered at the conference is the classic Pale Ale. This top fermented light beerhas its roots in the British brewing industry. It’s a daily beer that pairs well with any meal; it tastes really well in the evening. This highly drinkable beer has been brewed with abundance of American hops that started the craft revolution. In the 1970s craft breweries wanted to make a real difference by adding higher amounts of hops in its real form, not the bitter extract used by commercial brewers. Hops are added to the brew at late stages of its production with the use of “cold hopping” method i.e. the innovative way of adding this aromatic hop to the tank during low temperatures in order to extract aromatic oils from hop pines. And these are unconventional aromas of citrus and tropical fruit, resinous and pine tones, and many more depending on a specific variety. Such aromas have been produced by such hop varieties as Simcoe (resinous and pine tones) and Mosaic (fruit and tropical tones). Strongly hopped beers made a solid foundation of the craft beer revolution 40 years ago and still inspire craft brewers to develop their offer. New wave hops play the leading part in Pale Ale, American India Pale Ale (AIPA), Double and Triple IPAs.

Unconventional release. A mix of dark beer and fruit. Unusual and surprising. The foundation is Foreign Extra Stout, a stronger and more distinct version of the dark stout from the British Isles. During the colonial period it has been exported overseas. Traditionally, unmalted roasted barely is added to the brewing process, which, as the legend has it, was created by chance as a result of fire in one of the malt plants. When added to the beer, it produced unusual tones of dark chocolate, pumpernickel, cereal coffee, or bonfire ashes. Now we have enriched it with blueberries. The outcome is unexpected. Roasted tones go really well with fruity flavours, which are not as apparent as in Berliner Weise but equally intriguing. When added to a stronger beer full of malty aromas, blueberries bring to mind blackberries and blackcurrants. Interesting and thought-provoking. At one point you feel like drinking chocolate cake with fruity coating. What an unconventional combination which goes to show that we like experimenting. This is what craft brewing is about. The beer is infused with nitrogen instead of the traditional carbon dioxide, which gives the beer a velvety texture. To learn more about ART#16, go to http://jagodnik.pl/oficjalne-piwo-vimiedzynarodowej-konferencji-borowkowej

On top of its flavours, the label of ART#16 has been a feat itself featuring blue, raspberry and yellow dots that connect in various configurations. There are the metaphor of consolidation, cooperation, jointed projects, visions of consumer and market development. What we all focus on are values, shelf positioning, creating shopping and consumer behaviours. This is the reason why we have engaged so actively in the Conference. We hope that our new release will make an impression and inspire further collaboration projects. Together we can brew attractive beers that will be popular among beer enthusiasts and promote Polish unique produce. Poland is the leader on the blueberry market and one of the biggest producers of blueberries, raspberries, strawberries and currants.