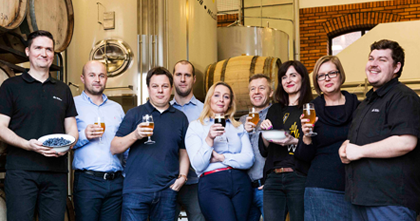 ART#16 Blueberry Foreign Extra Stout Nitro has been brewed in cooperation with the Polish Berry Cooperative, a European leader of blueberry production and an organizer of the Blueberry Conference. This traditional beer style, whose origins go back to the British Isles, has been refreshed by the abundance of superbly sweet Rubel-type blueberries. Combining dark chocolate, cacao and juicy fruit brings a smile to everyone’s face, not to mention the first sip of such a mix! Imagine a combination of striking blueberry sweetness balanced with roasted malts and its velvety texture produced by nitrogen. NOT SHAKEN; POURED QUICKLY!

What an exceptional beer, and an outstanding innovation, which serves as an example of the creative spirit we have been promoting. The joint mission of our collaboration is to promote craft, berries, and creative thinking that leads to success. The PBC has been a pioneer promoting integration between producers. We are happy to have the opportunity to present craft and two craft blueberry beers brewed this year to a large number of berry growers. ART#16 has become the official beer of the 6 th edition of the Blueberry Conference, which is the biggest meeting of berry growers in Poland! We’d like to invite all growers. Details of the sampling event taking place on 1/03 coming up soon. More info available at www.konferencjaborowkowa.pl.

There is much more coming up. ART#16 Blueberry Foreign Extra Stout Nitro premiers this weekend after the Conference. Beginning with Saturday 3/03 ART#16 is going to be available in the best pubs and multitaps in Poland. We would like everyone who grows berries, blackcurrant, blueberry, strawberry, or raspberry, to taste this latest release.

The origins of Foreign Extra Stout go back to the end of the 18 th and the beginning of the 19 th century Britain, where it was first brewed for the tropical markets. This is the reason for its high alcohol contents. Little amounts of hops used, just enough to produce some bitterness, account for malty aromas, specifically the ones produced by caramel malts and roasted barley. The bitter and traditional Magnum hop is added to balance the sweet and stronger Stout aroma produced by the used malts as well as the superb Rubel-type Berry Good blueberry, which is famous for its intense sweetness and low tartness.

Blueberries. The basic version of Foreign Extra Stout has been enriched with 100% natural Rubel-type blueberry puree supplied by the Polish Berry Cooperative. As blueberries have been cooled down right after they were harvested, they are super fresh! It’s a revolution to produce such fruity and refreshing beers all year long. Learn more about this revolutionary berry picking method at https://100mostow.pl/blog/2018/02/09/berrygood. The puree includes fruit, peels, and seeds so that the most nutritious ingredients have been preserved. Our cold hopping system, HopGun, has allowed us to bring about the colour, flavour and aroma.

The idea behind infusing beers with nitrogen rather than carbon dioxide is to increase its drinkability and change its structure into a more velvety one. Nitrogen’s ability to dissolve in liquids is several times lower than that of carbon dioxide. What we have used at Browar Stu Mostów is advanced technological solutions that allow us to dissolve as much nitrogen as possible in beer. Right after opening and pouring the beer into a glass (not shaken; poured quickly) , nitrogen escapes as quickly as possible creating a cascade effect of a huge amount of tiny bubbles. After a while, nitrogen moves up whisking protein dissolved in beer. As a result of this process creamy and long-lasting beer head of tiny bubbles is produced, which is not available in carbonated beers.

To fully enjoy the nitro beer, serve it right:

Join us for the release to see the new bottle and label. Stay tuned at
www.facebook.com/BrowarStuMostow