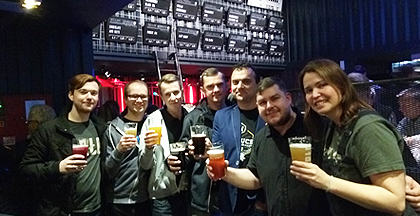 Browar Stu Mostów has been available in BRLN for some time now. Our distribution has been developing really well. ART#8 is considered an important beer here. We are planning a big event to strengthen its position even more. Last weekend was quite a feast!

We took part in the Polish Night at BRLO BRWHOUSE. Along with Browar Stu Mostów, Browar Nepomucen and Browar Łańcut participated in this promotion of Polish craft. The hosts were really impressed with the events happening on the Polish craft scene. We supported the ideas of our distributor from Berlin. The last weekend rankings are a bit different from the ones from Norway. The top beer is WRCLW Schöps, followed by Salamander AIPA, Salamander Black IPA, and ex aequo WRCLW Roggenbier and Salamander Blackcurrant Milkshake IPA.

Our mission in Berlin was to establish collaborative brewing with BRLO. Here is a photo from the brewery in Berlin. We are keeping our fingers crossed for favorable weather conditions but it looks like we are in for an exceptional project. Stay tuned for more news.