Release of “Wrocław on the Fork” guide
by Makłowicz and Bikont 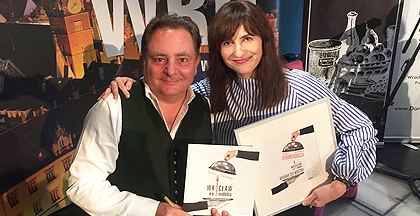 It’s “Wrocław on the Fork”

The pace at which the culinary traditions of Wrocław have been developing is incredible. We’ve got a fantastic culinary guide “Wrocław on the fork” that has been published at the expense of the city hall to be distributed for free in tourist information centers throughout the city. Wow. There is no other city in Poland which promotes its culinary traditions via a culinary and gratuitous guide.

The culinary festival “Europe on the fork” is driven by a powerful idea of promoting open- mindedness, also in terms of new flavours, getting together and exchanging experiences. The mission of the festival is to overcome barriers and encourage the belief that the more the merrier. The world becomes a better pace when we meet, eat and talk together. The authors of our culinary guide are pioneers of culinary critique. It is worth admitting how much the city of Wrocław owes to Piotr Bikont and Robert Makłowicz in terms of creating the atmosphere and offer.

“What’s happened in Wrocław over the last few years is totally out-of- this-world both in terms of the number of places springing up and world-class standards,” said Robert Makłowicz at the release event. It is in Wrocław that the trend for regional products originated, and where it continues. The official release of the culinary guide has opened up an opportunity to introduce the best producers of regional products. Browar Stu Mostów was appreciated for its cheeses, preserves, cold meats, honeys, and beers at the “Europe on the Fork” festival in June. Two produce by Concept Stu Mostów were awarded the title of The Best Flavour of the Lower Silesia Region: beer pretzel and wort-based chilly mustard. WRCLW Schöps was awarded in the category of beverages (wines, meads, beers, ciders).

The authors, Piotr Bikont and Robert Makłowicz, have selected 33 places and reviewed them in terms of their menu and decor. Our Concept Stu Mostów has been given “a special recommendation for excellent beers and reviving traditions and breakfast.” As they write “the restaurant in the craft brewery is more of brewing-culinary- baking-cheese- making-DJ facility. Multifaceted, tuned in, interdisciplinary project titled Concept Stu Mostów. It’s modern, laid back and attractive in terms of prices.” Read the guide for information or visit our brewery to taste the difference!

The late Piotr Bikont, a co-author of the culinary guide, has become a central figure of the official release. Piotr was a pioneer on the culinary scene in Poland. On top of that, he was also a director and an artist. For this reason, he treated cuisine as art. For us, he was a source of inspiration. Piotr taught us recognize flavours and talk about food. Those who knew him well admitted he was never sad. Those who worked with him said that he was the one who invented the festival “Europe on the Fork” in Wrocław. Piotr was a life enthusiast who has left a legacy in the form of the culinary guide and the festival. The 10 th edition of “Europe on the Fork” is scheduled for 1-4 June 2018.